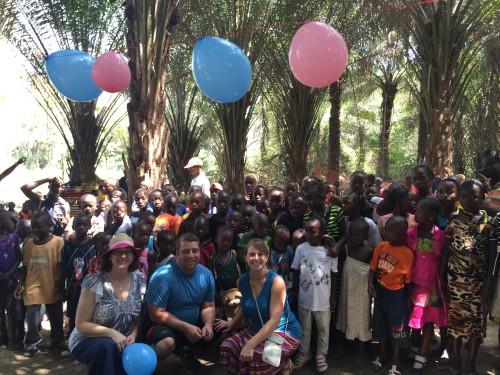 Kirk and Emily (Robinson) Proctor are doing great things to expand God’s Kingdom, and it all began at Indiana Wesleyan University.

Kirk grew up in the Wesleyan church. His family was well known in the church, usually attending multiple services a week. Kirk says that the only family who stayed longer in his childhood church besides his own family was the pastor’s family.

From a very young age Kirk put his faith in Christ, “From the ages of three to five, I gave my life to Christ every time I got in trouble, which was a lot.”

When Kirk was in seventh grade, he rededicated his life to Christ, which is when Kirk believes it was the first time it was real for him. The next summer Kirk received his call to ministry while at summer camp, knowing the Lord wanted him to be a pastor.

Being the youngest child in his family, Kirk’s older brother and sister had attended Indiana Wesleyan, and Kirk knew Indiana Wesleyan was where he wanted to be. During his first few years in college he spent time dodging and rediscovering his call into ministry, including a six month period where he thought he did not want to be a pastor at all.

Emily also grew up in a family active in the Wesleyan church. Although Emily gave her life to Christ at a young age, she became serious about her faith in middle school and high school by learning from her summer counselors at church camp. Through camps, conferences and rallies Emily was introduced to Indiana Wesleyan. When she discovered that IWU had a competitive cheer team that offered scholarships, Emily knew IWU was where she wanted to go.

During their time at IWU, Kirk and Emily were both admissions tour guides, which is where they met. They became friends and eventually began dating. The couple graduated in April of 2002, Kirk with a degree in Christian Ministries and a minor in Intercultural Studies, and Emily with a Communication degree in Public Relations and a minor in Spanish. They married a month after graduating on May 25, 2002. IWU has had a huge impact on both of their lives, “We absolutely loved our time at Indiana Wesleyan,” Emily said.

Since leaving IWU, the Proctors have been working in the Wesleyan church for 14 years. After marrying, Kirk and Emily moved to Wisconsin where they had taken jobs as youth ministers at Sand Lake Wesleyan Church. The pair then served for a few years at Sturgis Wesleyan Church in Michigan, and then moved to Illinois where they served at Heritage Church for six years. Now, the couple lives in Lansing, Michigan where Kirk is the senior pastor at Faith Church.

Kirk is passionate about keeping his congregation accountable for bringing new believers to Christ. About two years ago, Kirk told his church congregation that every time a non-believer comes to Christ they will put a number on the wall of the church. The number is located above the door, so that when congregants leave after the Sunday services they are reminded church is not just the pastor, but that they are a part of the Church.

Kirk believes his congregation has changed immensely because of this number above the door, “When they leave they think, ‘How many more people can come to Christ this week?’ And then they celebrate that number. We’ll announce a new number from time to time, and there is always a standing ovation with whooping and hollering.”

After the first year the number above the door was “113”. Kirk planned on taking the number down and starting over. However, people in the church asked him not to. Many people knew what number they were or what number their friends were, and they did not want to lose that symbol.

Today, the number is “227”. Of these 227 people, one-third of them were led to Christ by members of the church outside of services. Kirk has seen dozens of people come into the church and put up their own number, either by themselves or with their friend who brought them to Christ.

Last month, Kirk and Emily had the opportunity to travel to the Republic of Sierra Leone in West Africa. Faith church is currently partnered with World Hope International in a three year village partnership commitment. During these three years, Faith church raises monetary funds to allow the village they are partnered with to create commerce within their ow

Kirk is passionate about what World Hope International is doing around the world, “They know how the old saying goes, ‘Give a man a fish and he’ll eat for a day. Teach a man to fish and he’ll eat for a lifetime.’ That is what World Hope International does. They know what crops can grow or certain livestock that each village can have, so we pay for them to have these things.”

The village Kirk and Emily visited on behalf of their church had no well and only muddy water. Through the partnership, the village has been able to plant pineapple fields, and they now have two wells. The people of the village now have clean water, and can sell the pineapple to create commerce to provide for education and basic needs.

While in Sierra Leone, Kirk and Emily also had the opportunity to help missionaries who were in need of prayer, “We got to pour into some of the Wesleyan Missionaries there,” said Emily. Kirk knows that his work is not done with Faith church or with World  Hope International, “I hope that when this three year partnership is done we’ll pick another village.”

Written by Dezaray Barr, Writer for the Alumni Office. Dezaray Barr is a Freshman Strategic Communication and Honors Humanities double major at Indiana Wesleyan University in the John Wesley Honors College. At IWU Dezaray is involved in PRSSA leadership and runs both the JWHC Blog and her own blog. In 2015, Dezaray received the award of Horatio Alger National Scholar.

One Reply to “Kirk & Emily Proctor: Ministry from Michigan to Sierra Leone”