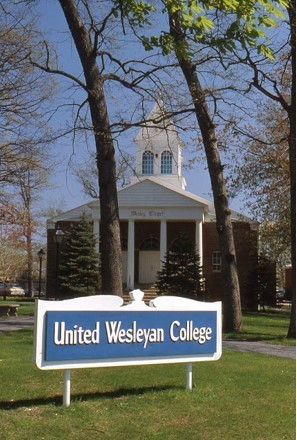 Reverend Tim Dilley is the lead pastor of Good Shepherd United Methodist in Fort Wayne, Indiana. He has been the lead pastor there for the past 20 months. In 1981, he graduated with his bachelors of arts in pre-seminary studies from United Wesleyan College. He then went on to study church history as Ashland Theological Seminary, and he received his Masters of Divinity from Methodist Theological School in 1989.

Dilley first sensed his call to ministry as a high school student. However, he really began an intentional, prayerful pursuit of his call during Spiritual Emphasis Week at UWC when Reverend Bill Kinnan spoke. It was during this moment that he surrendered his life to doing God’s ministry. This was not an easy choice for Dilley, because his father was hoping that he would take on the family business of dairy farming, expanding the farming operations. God made it clear to Dilley, though, that he was supposed to become a minister of the Word and the Sacraments. Dilley went forward boldly in faith, seeking after God and His will for his life.

His time at UWC was greatly influenced by Dr. Clarence Bence and Dr. Streeter Stuart. Dr. Bence was an example to Dilley of what it looked like to be faithful to scripture and to Wesleyan tradition. He not only learned about doctrinal differentiation, but he also learned about how to put his faith into practice in the everyday and the mundane. Through this relationship, Dilley said he began to “began to grow spiritually knowing that I could have a vital relationship with God and also know that there is a resulting power that comes from that relationship.”

Dr. Streeter was also incredibly influential in Dilley’s life. Dilley recalls learning many tools for effective and disciplined Biblical study and exposition. He emphasized the importance for pastors to continue to grow in their understanding of the Scriptures, and to learn how to best articulate to their congregational flock (as well as those who have not yet come to faith) the things they are gleaning from Scripture. Dilley also credits Streeter with truly impressing upon him the fact that the Bible is the inherent, inspired word of God, and that its primary purpose is revealing Christ to us. From that foundation, Streeter taught Dilley the many ways the word is also useful for guiding Christian life. Among his favorite moments with Streeter are the several times his summer course would go out for Dunk’in Donuts for coffee and conversation. He felt he truly got to know Streeter in those times, learning much from the simple ways he exhibited and embraced his faith in the day to day.

The security of his call to ministry is something Dilley still reviews and reflects on often. He believes in a two-fold calling to ministry, one that, in the words of Martin Luther. is“God’s voice heard by faith.” The second being the external call, including the recognition and affirmation of a church, and those in clerical authority.  Dilley’s inward call has continued to grow in compulsion and peace as he has served as a pastor. His primary external call happened in the validation of his ordination on June 1, 1991, when he was ordained by the North Indiana Conference of the United Methodist Church to the ministry of Word, Sacrament and Order.

Good Shepherd Church is 52-years-old and originally began in a wheat field. At its peak attendance, it was among the most growing, thriving United Methodist Churches in Indiana. Currently the church has around  500 in regular attendance, as well as a preschool where they serve 300 children.  Since Dilley stepped in as the new head pastor, they have revamped many aspects of their organization. They adopted a new mission statement, re-aligned staff (which redistributed many of the responsibilities), began a new small-group program and began the process of developing a clearer discipleship ministry for the church body. They also condensed the three traditional worship services into one service and started a new modern worship service. Further still, they began contemplating, as a staff and a congregation, what it will look like going forward to become a more missional church. In the future, they plan to begin a addiction-recovery ministry. Dilley, who has had past seasons of behavioral addictions, testifies to the peace, support and freedom that comes from healing alongside others.

Over the years, Dilley has served as a volunteer firefighter, as well as a fire chaplain. In his spare time, he loves water sports, biking, landscaping, cooking, reading, and the study of church history, reformed theology, and church revitalization. He also has interest in the piano. In all of this, he loves spending time with his family, including his grand-dog, Tazwell.

Dilley claims Romans 6:5,11 as his life verses: “Therefore, we have been buried with Christ by baptism into death, so that, just as Christ was raised from the dead by the glory of the Father, so we too might walk in newness of life . . . So you also must consider yourselves dead to sin and alive to God in Christ Jesus.”

The wisdom he would like to pass along to current IWU students is “do your best, [be] yourself.  Do not be afraid to say, ‘I don’t know.’ Just allow yourself to think about what are your greatest opportunities in life, even though you may feel lazy in doing so. Don’t ever forget to thank and remember those persons who helped you to become who you become and get to where you are today!” He also passed along the motto, “Love God. Love People. Don’t do dumb stuff!”