The Indiana Wesleyan University Student Alumni Association hosted Alumni and Faculty on campus today. The goal was to learn from their experiences. The Student Alumni Association calls these events “Triangle Talk”. Triangle Talks is modeled from the popular Ted Talks which is a popular speaker-led event. Triangle Talks are designed to help students learn from alumni and faculty about life outside of the IWU bubble. The month’s focus is on the importance of scholarship.

Jake Rupp opened the event with an introduction and prayer. He welcomed guest speakers and encouraged the audience to prepare for a time of question and answers at the end of the presentations. His first introduction was to Dr. Doug Morris, faculty from the Occupational Therapy Program.

He equates scholarship to hard work. “It is acquired through work.” says Morris. He referred the book, “The Disciplines of a Godly Man”. He reminded his audience that the books encourages us that we must be disciplined at work. He shared that the author says that “1 in 4 american workers admit that they do not do their best at work. 20% of an average work day is waisted.” The typical human brain puts out as much energy that can burn a 40 watt lightbulb for over 24 hours. “If we are going to be Christian scholars we need to think as a Christians. The Bible transforms our minds. There are many who are not even Christians that know more about the Bible than the average believer of the Bible.” He challenged the student to give it their best effort.

Jordan Easley is an IWU Graduate who is part of the Orr Fellowship and works at Tender Box. His talk focused on the theme of, “Why the World’s Coolest Companies Don’t Sell to You”.

Jordan shared a bit about his personal life. He showed pictures from his childhood. He laughed as he shared that he came from Hannah City, Illinois. He told the students that the city motto is “A small town where you make big friends.” He encouraged those that have come from small towns to embrace their rich heritage. He also shared about his student experience when he was a student. One of his humorous facts included a fun-fact about his middle name. He said it is “Chase, like the bank.”

His talk was about the business model that he uses at Tender Box. Since the new model of sales is a “B2B”, Business-to-Business sales model. He also talked about the “SaaA Company model, Software-as-a-Service. Jordan said, “We mostly hear about B2C – Business-to-Customers strategies but the really cool companies are selling to businesses.” He shared with the students that it is important to know how to sell to companies instead of only customers. He used the example of GoogleDrive versus Microsoft end-user products.

The advantage has to do with the ability to scale this model for the masses within the business. We now are sold the keys not the end-products. It is not a one-to-one model. It is a business-to-business model.

Brittany Herendeen was the third presenter. Her topic was entitled. “Lifelong Scholarship”. She is currently working in marketing in an orthopedic company.

She began her talk by saying, “Scholarship is more than just a college application. When I first started in my job I spent all my time studying anatomy books.”

Brittany offered three principles that she has learned since being out of school. They included;
1. God calls us to pursue wisdom. (Prover 16:16)
2. It is an indicator of our character and performance.
3. Whatever you do, work at is with all of your heart. (Colossians 3:23)

Brittany told the group of students that as she prepared she actually “Googled how to be a scholar.” She found six steps to being a scholar. She entitled her points; “Scholarship In and Out of the Classroom.”

1. Question Everything.
2. Be Curious.
3. Love Learning.
4. Fully Form Opinions. She stated that rather than just have an opinion she said, “Really study the subject.”
5. Change Your Mind. He point was well-taken as she shared, “Learning is about expanding your mind.”
6. Avoid Bias. “In college this is hard because we are influenced by our peers and family. It is important that we expand experiences and ideas.”

Brittany finished her presentation by encouraging the students to “Pursue scholarship in the classroom as a habit of striving. Pursue a life of learning for a lifetime.” 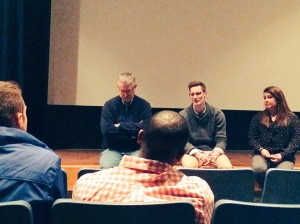