Seth Harshman (’03) became a McConn barista in the spring of 2002, the semester after the campus coffeehouse moved to the student center. Now co-manager of McConn, adjunct professor, and PhD candidate in Historical Theology, Harshman believes the significance of McConn has not changed since he was an undergraduate.

“The Daily Planet was not functioning,” Harshman admits as a Facilities carpenter named “Zippy” files down a steel support for what will become a bar table. “It didn’t ‘belong’ to anyone, so we planted a flag and called it ours.” When Harshman was a barista, McConn employed 10 people. According to their website, McConn now employs over 40 baristas and offers a host of internships and scholarships for business students. As McConn has grown, it has become increasingly hard to find seating, as many students camp out at tables for hours. Harshman claims that the Daily Planet was a “throwaway space,” merely “five chairs facing a TV.” Repurposing the Daily Planet space will add twenty-three seats that will allow for more face-to-face interaction. 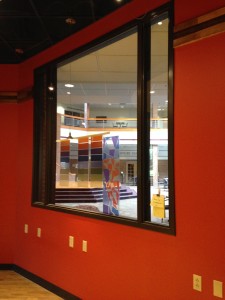 The Daily Planet remodel has been in the works for nearly two years, and was the subject of two class projects. In the fall of 2013, students in a Leadership course were asked to find something on campus that needed to be changed, and to change it. One group approached Harshman about the Daily Planet, wanting to completely overhaul the existing structure. “Tearing down walls wasn’t in the cards,” Harshman laughs, but the group’s proposal was the impetus for change. In the fall of 2014, Harshman contacted Interior Design professor Wendy Puffer about her students designing the new space. For her final project in Puffer’s Interior Space Planning class, Erika Reed (’17) designed the winning layout. Inspired by the inviting atmosphere of McConn, Reed selected “warm colors, furniture, and fabrics. It also has a lot of wood elements, which to me make a space feel inviting and comfortable.”  To complement Reed’s design and visually connect the new space to existing elements in McConn, Hunter Razo (’16) created a stained glass inspired applique for the window that looks out into the commons. The shards of color compose a world map, a reminder that students are members of a global community. 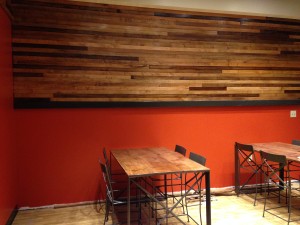 “Coffee doesn’t grow here. It is a connection with somewhere else.” Harshman hopes that the new McConn space reflects this connection with the outside world in ways that the Daily Planet never did. “[The TV in the Daily Planet] was just feeding information to students to encourage them to step out of the IWU Bubble,” Harshman claims, hoping that this new space will help students to “think” outside the Bubble in more tangible ways. Harshman motions toward the striking wood paneling on the wall behind him. “This is a 100 year old maple floor from a building downtown.” IWU alum Mark Brand (’13) is responsible for much of the interior work. Brand works for the city of Marion’s Redevelopment Commission, whose mission involves “developing plans to eliminate blight and working in partnership with private developers to generate new economic development.” The maple panels lining the wall are a reminder that IWU is not just its own community—IWU exists in a city with a history and a future.

Harshman does not yet have a name for the new space, which he describes as a “modern world café.” He hopes the space will become prime seating, reversing the stigma of the Daily Planet. With renovations wrapping up in a few weeks, the space will be open for use before the school year.

This year at Homecoming, October 2 & 3 we will unveil and celebrate this addition to the McConn by hosting a couple of events.

One event is for current and former Baristas of the McConn (McConn staff) who are invited to attend a reunion event on Saturday, October 3 from 10:30 AM in the very space.

The second event is open to all young alumni who desire to learn how to enjoy the McConn flavor at home. The session is called, “Techniques for Enjoying McConn at Home” led by the alumni of McConn staff with current Baristas. This event is on Saturday, October 3, 11:00 AM. This event will be held in the Century Dining Room.

One Reply to “From Fictitious Newsroom to Cosmopolitan Coffeehouse”