“I was in awe that I truly felt God move the earth. So often we sing worship songs and read verses in the Bible about God moving mountains, and before now it seemed more like a metaphor of God acting big in our lives. I didn’t ever think of God actually moving the ground. I felt God’s power. I literally felt His power and it was scary and amazing all at the same time,” Lindsey Wachter (’10) said about her time in Nepal.

Lindsey and a group of her friends at The Summit Church left their homes in North Carolina for a two-week mission trip to Nepal in April. They went into the trip without any specific plans for what they were going to do because the Summit believes that short-term missions is more about helping people with what they need rather than setting a prearranged agenda. She and her team stayed with a long-term missionary family in Kathmandu, the capital of Nepal.

They went to help jump-start the business that the family is developing. The company is focused on selling Nepali products to Americans out of materials sourced from different villages in the Himalayas. These materials are made into multiple products consisting of tote bags, computer sleeves, and more. 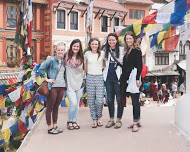 “We started designing and planning the products on our first day in Nepal. Then we spent three days working with a local tailor in Kathmandu. We made our vision come to life which was super cool and everything looked so great,” Lindsey said.

They met with non-believers as well as believers during their time in Nepal. Lindsey enjoyed connecting with and encouraging the fellow believers she met in Kathmandu. “It was so awesome just to get to encourage them and love on them. We were able to talk with them about our favorite Bible verses and different attributes that we love about God,” she said.

With her Photography degree and her job at The Summit Church as their Video Producer, Lindsey also enjoyed visually capturing their time in Nepal. She ended up capturing a much more powerful moment than she had imagined.

On Saturday, Lindsey and her team took a break and went out shopping and exploring the tourist area in Thamel. The area is similar to Chinatown in New York City with its narrow roads, tall buildings, and many people. “We were heading into one of those stores to see what we could find, just killing time, and then the earthquake happened,” she said

Visiting a country in the developing world, Nepal’s buildings are not built sturdy enough for people to find shelter under doorways or tables as they might here in the States. The safest place to be is outside, but there is only so much room outside on the street.

“We were standing inside, and the lights flickered and then went off. The floor started to rumble almost like it feels when you are in a parking garage and a car drives by; you can feel the floor moving. Someone shouted, ‘Get outside!’ We dropped everything we were holding and ran for the door when the building started moving side to side,” Lindsey said.

The earthquake started out as a typical Nepali earthquake, shifting the ground back and forth. This one was different, though, when the ground began to roll in addition to the shifting. Lindsey didn’t make it outside because of the force of the earthquake and the crowded doorway: “People were getting tossed about, and I got thrown into a wall of hiking backpacks.”

The earthquake had a magnitude of 7.8. “After it was over,” Lindsey said, “I walked down the steps thinking, ‘Get me out of here.’ My legs felt like jello and I wasn’t sure if the ground was still moving or if it was all the adrenaline that had built up. I didn’t know what to do.”

Lindsey asked the husband of her host family how the earthquake related to other earthquakes, and he said it was fairly big. The Nepali people have been waiting for this earthquake to happen for about 80 years, so most of them lost it once it began.

They found the wife of the host family and then left the street and went back to their home. It took about two hours to walk there because there were so many people. Next to the host family’s house is the Hyatt Hotel. The group had to climb through a hole in the Hyatt’s perimeter wall so they could camp out in an open field, where it’s safest during an earthquake.

In Nepal, families have earthquake emergency boxes, which the team’s host family brought out to the field to set up tents and tarps for them to sleep in.

“We were pretty rattled but we didn’t realize how big it was at the time because we didn’t see any really bad damage. We didn’t see buildings falling down or people frantically trying to rescue other people, so we just weren’t really sure what the damage looked like as a whole throughout Nepal,” Lindsey said.

They continued to feel aftershocks throughout the night, one reaching a magnitude of 6.7, and the anxiety level of everyone continued to grow. They had not eaten much that day and were trying to save the clean water they still had.

Lindsey was amazed by the Nepali people’s reactions throughout the whole thing. She and her team didn’t know what to expect. The Nepali people could have started looting or rioting, but instead they were helping each other. One man even hiked to his house to bring the Summit team a waterproof tent. “It was such a blessing, because the next night it rained for two hours,” she said.

“It was so amazing to see the Nepali people come together in this time of hurt and destruction. People didn’t know if their families were safe, and they were still willing to help complete strangers,” she said.

They stayed in their tent village for three days and two nights before leaving for the US Embassy. They did not want to take up resources such as food and water. “Leaving our little tent village and taking a taxi to the Embassy was really difficult, because as an American I just got an easy pass right out of there… It was so hard to know that I was going some place safe, and then going home to the States. I’m pretty sure I left my heart in Nepal.” She is hopeful that she will get to return to help the people and produce a video of them telling their stories.

On the flight home, Lindsey had much time to journal and pray about her time in Nepal. Before going on the trip, she picked a verse to dwell on during her time there. She chose Ephesians 3:20-21, which says, “Now to Him who is able to do immeasurably more than all we ask or imagine, according to His power that is at work within us, to Him be glory in the church and in Christ Jesus…”

She never imagined that God would do something so huge. The trip was both enjoyable and difficult for the team. God protected and provided for Lindsey and her friends, but it was heartbreaking to leave so much destruction behind.

Lindsey asks that others pray for peace and calm in the hearts of the Nepali people, as they are afraid for their lives: “Please pray that they have calm hearts and really feel God’s presence among them. Also pray for the city as a whole, that they are able to rebuild in safe ways for the future.”