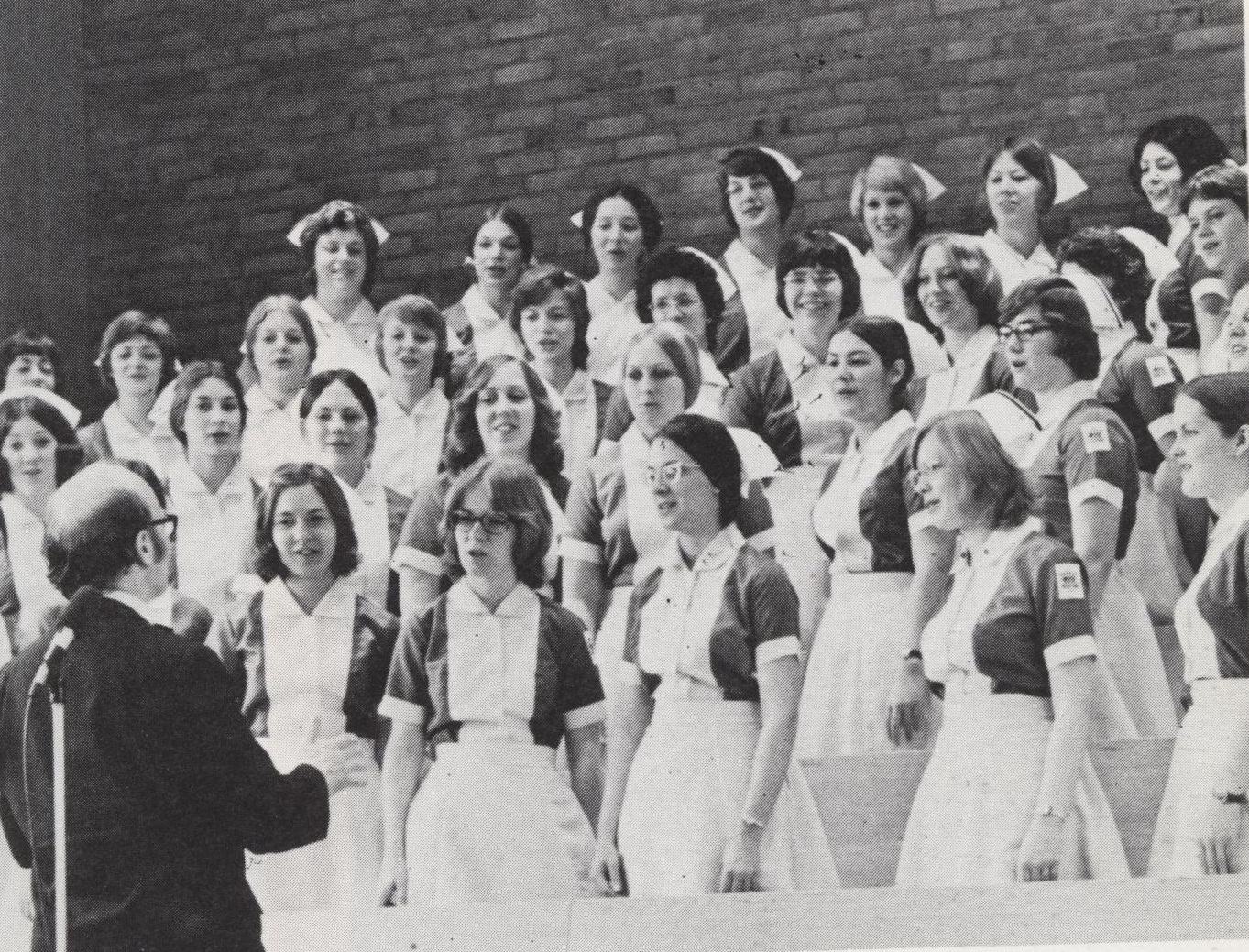 When Marilyn Pieper Simons and Brenda McVean Sloan came to Marion College as students in 1974 and 1975 respectively, there was a School of Nursing in its infancy at Marion College. The first class of 33 students graduated in 1975.  Since then, over 2,000 students have graduated from the Division of Pre-licensure Nursing at Indiana Wesleyan University. Overall, over 10,000 students have graduated from the School of Nursing as a whole.

In the early years, we taught nursing in one classroom in the Burns Hall and maybe a classroom in an old house purchased by the school to eventually be raised. The lab was in one small room and the faculty starred in their own homemade training videos. There was one mannequin, usually in a bed in the classroom, with a really bad wig. Faculty offices were in one room with partitions in between so privacy was unheard of. There were 11 faculty members, a division chair, and one secretary. There was one key to enter every building and office on campus. The Division of Nursing moved multiple times while renovations were completed for our offices. When the graduate program was added in 1981, it was housed in the Burns Hall. The graduate program and undergraduate programs grew so that there was not room for both to be together in one building. The undergraduate program was housed on the 42 Street campus and the graduate program was moved to the 51st Street campus.

By 2004, the nursing programs had grown into several divisions; the pre-licensure division, the post-licensure division, and the graduate program and the School of Nursing became into being. It was difficult to conduct business within the School of Nursing with the divisions being held on two different campuses. Plans were put into place to expand Burns Hall and in the spring of 2014, the School of  Nursing moved into one building—the Ott Hall of Sciences and Nursing. The new offices are spacious, private, bright, and much appreciated (especially for the ones who started in the early years). Now there are no keys to enter the buildings, just I.D. cards. The current lab is state of the art with multiple classrooms, multiple high-fidelity simulation mannequins, and the homemade videos have been mostly replaced with interactive, online simulations. The quality of the lab is often a deciding factor for prospective nursing when comparing the SON at IWU with any other nursing program across the country.

The mission of Marion College in the early 1970’s was to “…search for truth by study in the liberal arts and in professional education within the framework of Christian faith and philosophy so the person is developed for service to God and man, to the church and to society.”  The current mission of Indiana Wesleyan University is “…a Christ-Centered academic community committed to changing the world by developing students in character, scholarship and leadership.”  Although physical facilities are important, the reason that Brenda McVean Sloan (’76) and Marilyn Pieper Simons (’77) are teaching in the School of Nursing at Indiana Wesleyan University is because God has called them to be where they are. The physical campus has changed but the mission has never wavered. Dr. Lois Ellis used to say, “The sun never sets on the Indiana Wesleyan University nursing graduate.” There are graduates in every corner of the world serving others and carrying on the mission of the University. All the glory goes to God. May he continue to bless those involved in the School of Nursing at Indiana Wesleyan University.

Graduates of the School of Nursing are invited to attend a reception event at the Ott Hall Sciences and Nursing on Saturday, October 3. Watch for more information in the upcoming Triangle Magazine and the SON Magazine.

Used by permission – School of Nursing.

One Reply to “Forty Years of Nursing at IWU”