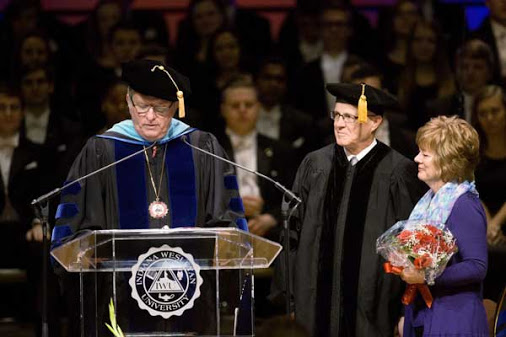 In his introduction to Rev. John A. Bray’s commencement speech this past April, IWU President Dr. David Wright called the veteran pastor a “creative communicator with a passion for helping people find a faith that works in the real world.” IWU is pleased to announce that Rev. Bray will be the Interim Dean of the Chapel until the search committee can make a permanent selection in early 2016. 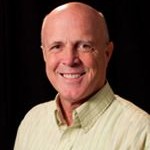 After graduating from Indiana Wesleyan in 1973, Bray immediately began serving as senior pastor at Heritage Wesleyan Church in Rock Island, Illinois. He has been a member of the IWU board of trustees since 1999, and in 2007, earned his Master of Arts degree in Ministry and Leadership from College of Graduate Studies (forerunner of of Wesley Seminary at IWU). In 2014, Rev. Bray retired from Heritage Wesleyan, where he had been senior pastor for 41 years. Last year, he served as Senior Pastor Emeritus at Heritage and Interim Pastor at First Wesleyan Church in Battle Creek, Michigan. Dr. Wright talks of Bray’s entrepreneurial spirit, citing the growth of Heritage Wesleyan from 24 members to over 3,000 during Bray’s tenure. “Reverend Bray is one of those people to whom I look up, and admire, and whose counsel and guidance I value tremendously as a friend and as a member of our board,” says Wright.

“I’m very excited about the breadth of experience and perspective [Bray] will bring to campus for this year,” says Dr. Keith Newman, CEO for Residential Education at IWU’s Marion campus. “In addition, his wife, Patty, will be a wonderful partner in ministry with him. Students will love his sense of humor, his practical approach, and his winsome manner.”

Dr. Jim “Umfundisi” Lo served as Dean of the Chapel until the end of the Spring semester. He is now serving as IWU’s Campus Pastor and Professor of Religion stated, “I was so glad to hear that Rev John Bray is going to serve as The interim Dean of the chapel.  He has a big heart for God, is a superb preacher-teacher, is a humble and passionate leader, is an encourager of others and has the anointing of the Almighty upon him.” Offering full support in this decision Lo encourages people to life him in prayer saying, “I will be lifting him up in prayers and supporting him as he ministers at IWU. thanking the Lord.”

In his April commencement address where Rev. John Bray received an honorary Doctor of Divinity degree, 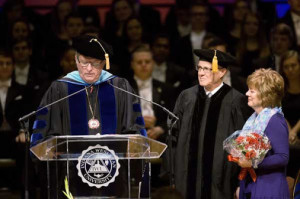 Bray was short and simple, joking that the only thing he remembers from his commencement was that he almost tripped getting onto the stage, and that “it was sunny.” After reading from Ecclesiastes 12 and elaborating on a few key steps to post-graduate life, Bray concluded: “How do you measure success? No matter what your dream, honor God. Keep his commands. And live every day with integrity.” After a short pause, Bray quipped, “And some of you are thinking, eight months? He’s had eight months to work on this, and that’s all he’s got?” While his self-deprecating humor won over the commencement crowd, Rev. Bray has had far more than eight months to prepare for this new role as Interim DoC—he and his wife have been in ministry for over 40 years, and will have many opportunities these next few months to use that experience through speaking and ministering to the student body. Indiana Wesleyan is excited to have Rev. Bray on board until a new Dean of the Chapel is selected.