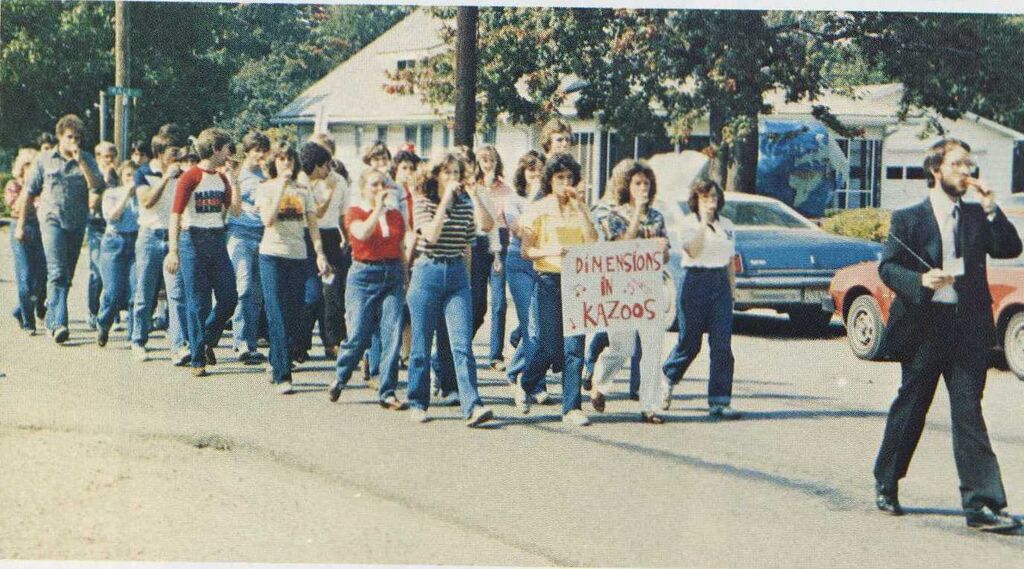 Paul Simpson ’79 attended classes in the late 70’s like every other student today but within him was a desire to make a difference. As a student, he felt that there was more in life than the struggles and burdens we all encounter. In Paul’s mind and heart, he knew he wanted to do something that could be fun and be a way to encourage others. Out of that desire, the Kazoo Band at Marion College was formed in 1977 and again in 1978.

Paul’s uncle was Maurice Burns for which the Burns Hall was named. It was through his intervention that he was able to make the move from Oklahoma, transferring to Marion College (IWU). “When I came to Marion, no one knew me except for a few including Marilyn Piper Simons.” Marilyn now teaches in the School of Nursing. “I came in 1975 and saw my role as someone that wanted to help others.”

Paul got the idea of a Kazoo Band from a sister school, and he wanted use it as way to encourage others. The Kazoo Band increased the student’s college spirit and is still talked about today!

Paul was a student studying the ministry at the time and interning with Lakeview Wesleyan Church, which proved to be a real benefit. In-keeping with his vision of a Kazoo Band, he needed to get 300 students to the Downtown Marion Courthouse. “Being just students, I had to convince [the church] to let me use their buses. To my amazement, [they] gave me the buses to use!” His first step was complete. Next, he needed a platform, a director and a banner. “I spoke to the head of the music department and convinced Professor Paul Olson to direct the band and then the art department to paint a large banner to lead the parade,” Paul said. He invited the female students to be up-front and carry the banner.

Paul made this event public as best he could. Enjoying every second of it, he planned to publicize the kazoo band all over campus. Since he was currently in a Journalism class, he asked the WBAT radio staff to talk about his band on air. Paul remembers, “I needed to make an announcement to the community about what I called the world’s largest kazoo band.” They made their announcement and Paul begin selling Kazoos. He also made sure the TV affiliate Channel 13 and the newspaper would cover the event. “I got the newspaper to capture pictures which landed on the front page of the next day’s Sunday edition,” he said.

Paul spoke with enthusiasm as he recalled that the Kazoo Band was featured in national news over WBAT radio. They shared it with affiliate stations across the country. “It went national,” Paul added, “even people in West Michigan heard about it. The West Michigan University in Kalamazoo, Michigan contacted me and invited the Marion College band to play along with their marching band for a West Michigan Broncos Football game.” The Tonight Show host, Ed McMahon, later developed it even further: “McMann followed out efforts by having a marching band of over 1,000 do it on live national TV in Terre Haute, Indiana. It had never been done until after our publicity,” Paul said.

“What I learned in life is that things happen in threes. We had our time in the late 70’s and this is your turn.” There was another Kazoo Band in the early 80’s, lead by students from the Music Department with a group called Dimensions in Brass.

Today Paul is serving his local church and community by leading prayer efforts. He is currently praying over Rapid City, South Dakota. He says that his ministry is to be an encourager. Through 25 years of work, he has learned that one of the most important things we can do for people is encourage them.

Paul indicated that it is not all that different from his time as a college student. The Kazoo Band was intended to bring encouragement to everyone on campus. “People have anger and hurts but we can encourage them!” Paul said.

He wanted to stress that even though we have to go through life’s lessons, he said, “Life is not fair. Life is complicated and cruel but life is also cool. Run the race even though sometimes you fall. But you have to get up and keep running.”

Part of the prayer ministry that Paul leads involved a healing ministry. He sees the importance of praying for others’ emotional and physical well-being. “The Kazoo Band was that; it was a goofy thing, but it encouraged people while also being fun!”

Paul has one more challenge to offer the student body at IWU today. He said, “God will work with you! Just because you are a Christian, you may still have anger or hurt. Give these to the Lord because He cares for you.”

On a personal note. It was remarkable to speak to Paul in the writing of this article. Paul ended the phone call by praying for me and the students, faculty and leaders at IWU. He especially prayed for anyone dealing with hurt and anger. His prayer included a hope that God can remove anger and hurt, and that the emptiness can be filled with His love so people become encouragers.

One Reply to “Become an Encourager: Lessons from a Homecoming Kazoo Band”