When you first meet Pastor Bill Kinnan, Jr., you are struck by his positive energy and bright smile.  Known for being friendly, you also discover a genuine spirited person who is quick to encourage.  On a personal level, I have experienced his encouragement and I have witnessed his positive joy for ministry as he leads other.

Pastor of the Week is a recognition to pastors who go beyond the average and are able to be successful in ministry, winning friends and demonstrate a commitment to their strong faith in Christ. Pastor Bill. is successful because of his never-yielding enthusiasm for the local church. 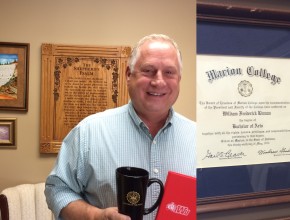 I caught up with Pastor Bill near Vassar, Michigan a few weeks ago over dinner. He was wrapping up a meeting with the current District Superintendent.  He served on the District Board of Administration. We laughed at the history we share not only in ministry as we both began a similar path of Ordination in the East Michigan District of the Wesleyan Church but also common experiences we share having attended Marion College (now IWU). Pastor Bill shared that, “We are blessed to have our start at this (East Michigan) District.”

Pastor Bill shared that he loved seeing the success and growth of churches. His heart is as a church planter, reaching people for Christ is his passion. David Drury, Chief of Staff at the Wesleyan Church said that he is a “Multiplier!” referring to his ability to start churches. Two congregations have begun under his ministry in South Dakota. This is even documented in Marlin Mull’s book, A Biblical Church Planting Manual. Pastor Bill spoke about two things he has received kudos on when I asked about his success. One of those included church planting and another was his love for world missions. He shared about how God uses him as a connector and has had many outcomes. He shared with excitement when he spoke of one such connection when he met Alfred and Muumbe Kalembo from Zambia. This friendship has now become a developing network of many others supporting world missions. 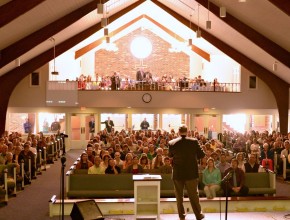 I asked about any challenges that he has faced in ministry. He shared that he has “learned from his mistakes.” He spoke about learning how the timing of ministry-related decisions. “I am learning to figure out how soon or when to ‘pull-the-trigger’ and setting the right pace,” he shared. “In my first church I focused on making changes that were too quick,” he added.

Pastor Bill talked about the different styles pastors have. He commented, “I love originals.” Referring to pastors who have a very unique style of ministry and personality. He stated, “There are individuals who do not imitate others like Dr. Jim Lo, Professor at IWU, or others like Dr. JoAnne Lyon and Dr. Earle Wilson, former General Superintendents to the Wesleyan Church. He offered advice to younger ministers saying, “Just be yourself and let the Lord work through you.”

Pastor Bill is a cheerleader for education and especially his alma mater, IWU. He graduated from IWU in 1973. He shared, “You may not find anyone more supportive.”  I believe it!  He has hosted IWU ministry teams at his church, supports IWU students with the Church Matching program, and is a cheerleader on a district level as well. “IWU is my alma mater,” he stated, “I love to cheer for IWU.”

Pastor Bill has been in ministry since 1983. He is married to Donna and has two children, Andrew who is a Chemical Operator in Ohio and Kindra who is an Elementary Teacher in Texas.  His children are graduates of IWU. This week’s recognition goes to Bill Kinnan as Pastor of the Week.