By Rick E. Carder, Director of Alumni and Church Engagement 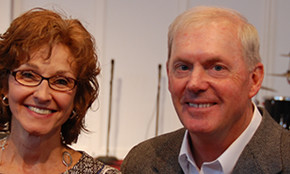 It was in mid-80’s that I first became acquainted with Dave who was speaking at an event that students of Marion College (now Indiana Wesleyan University). I was immediately impressed by his personal interest he took in speaking with me. His reputation as a Wesleyan Churchman and pastor had already impressed me for his commitment to serving and leading pastors.

Today I invite you to celebrate with me and congratulate David E. Holdren as Pastor of the Week, highlighted by Indiana Wesleyan University Office of University Relations, Church Engagement.

Holdren graduated from Owosso College in Michigan and completed his seminary degree at Asbury Theological School in Wilmore, Kentucky. According to West High Alumni article,

Along the way, Indiana Wesleyan University and Houghton College both presented Dave with honorary doctorate degrees. Since Dave could not get his wife to call him Dr. Dave, he suggested that with two master’s degrees, maybe she could refer to him as…well, that didn’t work either.

In 2000, Holdren elected him to be one of the General Superintendents of The Wesleyan Church World-wide. He was the only one at this top level to ever be elected directly from the role of a pastor at that time.

Holdren is now serving the Daybreak Community Church in Marion, Ohio. He is the lead pastor of a growing church that is intentional about reaching out to their community. From Dayspring Wesleyan Church’s website,

He loves pastoral work because, “you have the honor of going through life with people”. He and Marlene led the Cypress Wesleyan congregation in Columbus into a long period of campus development and growth that included a 2,000 member congregation, school, preschool, daycare and a wide ranging, large sports ministry, all on a 110 acre campus.

In the 80’s, Holdren served as a churchman at the Wesleyan Church Headquarters as its Executive Editor of Curriculum and Director of Leadership Development. He served as General Superintendent beginning in 2000 for a few year’s. He began his ministry as a child while at Cypress Wesleyan Church. He worked as a janitor when he was only thirteen years old. From 1985 to 2000 the Holdrens gave leadership to the Cypress Wesleyan Church, a ministry on the West Side of Columbus, Ohio as the church attendance grew from 250 to over 1,700.

I caught up with Pastor Holdren in Brooksville, Florida. He is currently speaking at the Brookville Wesleyan Church during their annual Bible Conference. His depth of Biblical insights and art of storytelling sets him apart from his peers. He is well-received by people and personally loves teaching the Word of God.

His ministry of writing, preaching, and leading Bible Conferences and Camp Meetings has been a service to the Church at-large. His desire is to disciple and train church leaders. Author of Bible Commentaries and many articles, his influence extends beyond his local church. From the Commentary article by Wesleyan Publishing,

This commentary explores key issues that may explain why 2 Peter is one of the least read books of the Bible. The relationship between 2 Peter and Jude is given special attention, and five major objections to the Christian message, as presented by false teachers, are presented and Peter’s rebuttal to each is noted. 1, 2 & 3 John and Jude are written with pastors and local church teachers in mind. Drawing on biblical scholarship, this commentary offers clear applications that impact the daily life of followers of Christ, providing insight on the nature of Christ, the dynamic power of love, and the essence of holy living.

Some of his sermons are available on Wesleyan Sermons. Holdren is a pastor to the Called. He encouraged church leaders, “Be encouraged because God does not just call the gifted he gifts the called.”

Pastor Holdren is married to Marlene and has two grown daughters, six grandkids and a great granddaughter.

Congratulate Pastor Dr. David Holdren as this week’s Pastor of the Week.