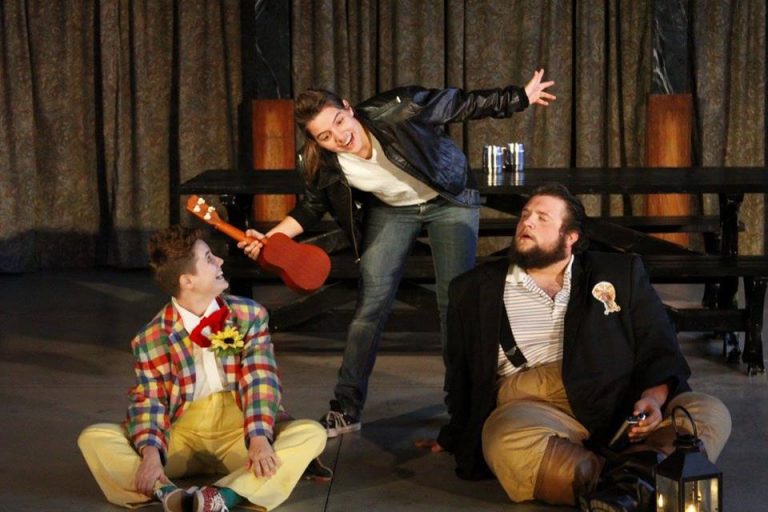 Greg Fiebig is a Professor of Communication and the Division Chair for the Communication and Theatre Department at Indiana Wesleyan. He graduated from Southwest Baptist University with bachelor’s degrees in Speech and Sociology. He, then, continued his education by achieving a master’s degree in Theatre from University of Central Missouri, and finally, accomplished a PhD from the University of Missouri in Speech Communication. Fiebig and his family moved to Marion from Missouri 11 years ago, and he has spent the last 18 years in higher education. He previously was in full-time ministry. Fiebig’s love for theatre and consequently, Shakespeare has allowed him to enhance the Marion and Wabash areas.

Fiebig began his interview by stating, “Something I’ve always wanted to do is start a theatre company,” and that is exactly what he has done. Since he graduated with his master’s degree in Theatre, Fiebig has desired to act upon it. Thus began Hoosier Shakes. However, it was not as simple as it sounds. Fiebig and others have put much work into the program, making it a personal, unique experience for all who attend. Rachel Marley, a member of the Board of Directors for Hoosier Shakes, a theatre teacher at the Community School of the Arts in Marion, and a Marion native, said, “I have lived here my whole life. I think that is part of why I am passionate about Hoosier Shakes; this is MY community. MY friends are benefitting from the vitalization of the arts in Marion. MY students are being exposed to professional theatre, and Shakespeare is now accessible for them.”

Hoosier Shakes aims to recreate Shakespeare’s plays much like they were originally performed. The group “vitalizes the performance of Shakespeare and other drama for the diverse communities of Grant and Wabash Counties, Indiana by presenting inspiring, accessible, literate, experiential theatrical performance.” The plays are performed with completely natural light, and artificial light only for nighttime performances. Only 12 members are casted for the plays in which have approximately 40 parts to fill, so actors play many different parts, using costume change as a signifier for the audience.

Brainstorming for the group began in 2012 when Fiebig heard about a Lilly grant available. Being entrepreneurial, supplying jobs for local community members, and working with a sponsoring company were the qualifications that needed to be met for the group to have the ability to apply for the grant. Fiebig and Kendra Emmett-Goldwasser, a previous Theatre student of Fiebig, contacted The American Shakespeare Center to see about a partnership. The center agreed to sponsor Fiebig and Emmett-Goldwasser and their plans for Hoosier Shakes.

The Hoosier Shakes’ cast is composed of four current Indiana Wesleyan students, four alumni/local actors and four professional actors. The group promotes communication and connection for the young actors and a chance for the professional actors to mentor. Emily Dykstra, an alumni actor for the company, said, “I’m really excited to help younger actors grow in their craft in whatever way I can. I’m also looking forward to learning from and being challenged by them, the other professional actors, and our directors as well. Plus, I’m really excited to work again with Dr. Fiebig and some other alumni I know at IWU.”

Although Hoosier Shakes did not win the Lilly grant, the screen committee believed their idea was unique and offered them 500 dollars, and a few months later, Fiebig was presented with another opportunity to expand. That summer, Sarah Enloe, Director of Education at The American Shakespeare Center, contacted Fiebig about beginning a American Shakespeare Center consortium including various colleges and universities around the country. Campuses around the country wanted to begin a program similar to Hoosier Shakes.

Fiebig spoke on the importance of programs like Hoosier Shakes at small Christian universities. He said, “Students in Theatre programs in small Christian universities are not going to go from these programs to Broadway. It just isn’t going to happen. So, we started trying to figure out ways to get them into graduate programs, and I always thought it would be nice to have a company where we could get professional actors to come and give their time.”

Fiebig has certainly seen the benefits of putting his ideas into action. He stated, “A few of our alumni have written blog posts on our website. They talked about wanting to give back. The ‘pay it forward’ sort of thing. They want to come back and give their experience.” Fiebig believes that Theatre students learn best when practicing their skills, and having professionals who have experienced life within the Theatre profession is extremely helpful. Emily Dykstra said that although theatre was not a major during her time at IWU, “The professors did a great job preparing us to be competitive in a very tough industry, but it would have been so great to have had an opportunity like this closer to campus as a student. So I think the work the company is doing to give current students the chance to work professionally and to bring pay-what-you-can shows to Marion is really special and important.”

The 2017 Hoosier Shakes season begins on July 19 and runs through August 6. The company will be performing Much Ado about Nothing and Romeo and Juliet. The shows will be held at the green space adjacent to the Grant County YMCA in Marion and The Charley Creek Gardens in Wabash. For more information and to learn more about the cast members, visit:  http://hoosiershakes.com/.

Current and Former Actors include:

Board of Directors includes:

Written by Emily Neideck, a writer for the Alumni Center and a junior Writing major at IWU. She is active on the cross country and track teams. She is passionate about using her writing skills to share the good news of Christ with others.