His story goes from small-town Indiana to Nashville, from rock to country, and from dreamer to performer. Quinton Gibson is an Indiana Wesleyan University ’91 alum who turned his dream into a reality. 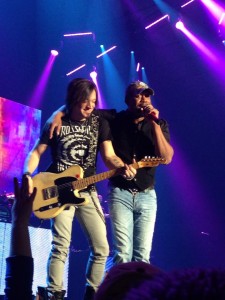 When Gibson was in third grade, his grandmother gave him a KISS album for his eighth birthday. Little did she know that this would be the spark to his beloved career. He became a solid fan of rock music, and co-created a Christian Rock band in high school named Seraiah. Now, he is the lead guitarist for the Grammy-winning country artist, Darius Rucker. “On the inside, I’m still that kid from the ‘80s that spent his days dreaming about walking on stage and performing in front of thousands of fans every night!” he said in a blog.

He graduated high school and continued his band throughout his years at IWU. “Cool thing is that when we first moved there, it was still Marion College and the whole rock thing was not really accepted. I came in with earrings and long hair. At that time, it was weird for Marion College to have that. We were wearing ripped up shirts and god-awful clothing,” he said.

Although he and his band stood out from the crowd at school, the music professors such as Dr. Kindley, Professor Bell, and Professor Guy were encouraging. “I was really close with them,” Gibson said. He and his band members would rehearse right above Professor Guy’s office. “We were a rock band rehearsing while Professor Guy was trying to teach,” he said. “I can’t tell you how many times he came up and asked us to stop. But at the same time, I remember him telling us, ‘I don’t really get what you guys are doing, but I appreciate what you’re doing,’ and that meant a lot to me.”

The history professor, Dr. Martin, also largely influenced Gibson during his time at IWU. “Dr. Martin had people coming from all over the world to Indiana Wesleyan just so they could study under him… He helped me shape my world views,” Gibson said. He had voluntarily taken so many history classes from Dr. Martin as electives that he was only two classes short of completing the History major his senior year. He decided to take those classes and graduate with a double major in Music and History. 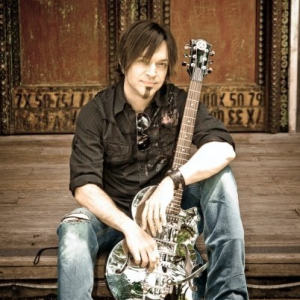 Studying Classical Guitar at IWU was not an easy task. The required classes were challenging and he often times wondered what he was doing. He wanted to be in a rock band, so why was he sitting in the library listening to classical records? Gibson now appreciates the discipline that it made him develop: “I really developed a strong work ethic and I took that with me to Nashville, which I had to have because Nashville is a very seriously competitive city.”

Going beyond music and classes, IWU served as a solid foundation for Gibson’s personal life. “Going to college really helped shape a lot of my world views from politics to religion to everything else in life. I learned a ton regarding music of course, and I think the whole experience of friendships and relationships I had with people and professors were big influences on me,” he said.

He continued friendships with two of his childhood best friends, and they are still friends to this day. Mike Belt was the bassist in Seraiah and Kyle Dietz was the drummer. Belt is now a pastor at a church in Dallas, Texas called Northcrest Community Church, and Dietz is an aspiring artist who lives in Nashville, Tennessee. Dietz has appeared as an extra drummer in the ABC TV show Nashville.

Gibson lives in Nashville now as well, but spends most of his time touring. Darius Rucker just launched a new the Southern Style Tour in May. They will visit back to his home state to play in Indianapolis, Indiana at the Klipsch Music Center on June 27. 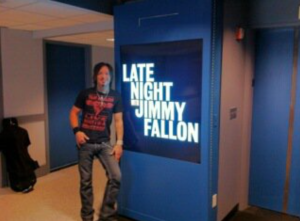 He has toured the country with Rucker for six years, performing on nationally televised shows such as the Oprah Winfrey Show, Late Show with David Letterman, The Tonight show with Jay Leno, Good Morning America, and many more.

His favorite part about his career is the performance. “I still get really pumped up and excited about doing the show every night. For me, this is like a combination of all my dreams I had when I was a kid growing up,” Gibson said. He always fantasized about being up on stage in front of thousands of people, and now that dream has become his profession. He is proud to say that the journey never gets old.

“There is nothing like the feeling of being in an arena and the lights going off and you’re getting ready to walk on stage. You’ve got 15,000 people screaming and it’s still an amazing feeling. I still feel like a kid when I get out there.” He found it difficult to describe the feeling: “If I could package it in a little pill and give it to everyone, I totally would. It’s an adrenaline rush that I can’t even describe.”

His future plans are to keep doing music until he cannot do it anymore. He has three kids and has loved watching them grow up. Gibson is a great father and has succeeded at balancing music and everything else. He has a few other dreams to pursue, recognizing that “there is more to life than music.” Outside of music, he is a personal trainer and loves working out. He would like to open up his own gym and help people get on track and live healthy lives. “If I could do music and have a gym that would be awesome,” he said. 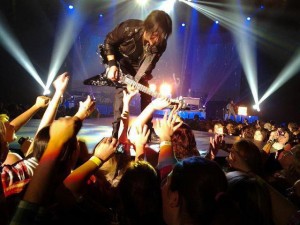 Gibson considers himself very lucky and does not take his opportunities for granted. He enjoys working with the Rucker: “Darius is a great guy to work for,” he said. “I feel very fortunate to be a part of this. It’s not too often that you are able to work for someone who has had not only one successful career [Hootie in the Blowfish] but now a second very successful country music career. I’ve seen it grow from something small into something massively huge and it’s exciting to be a part of it.”