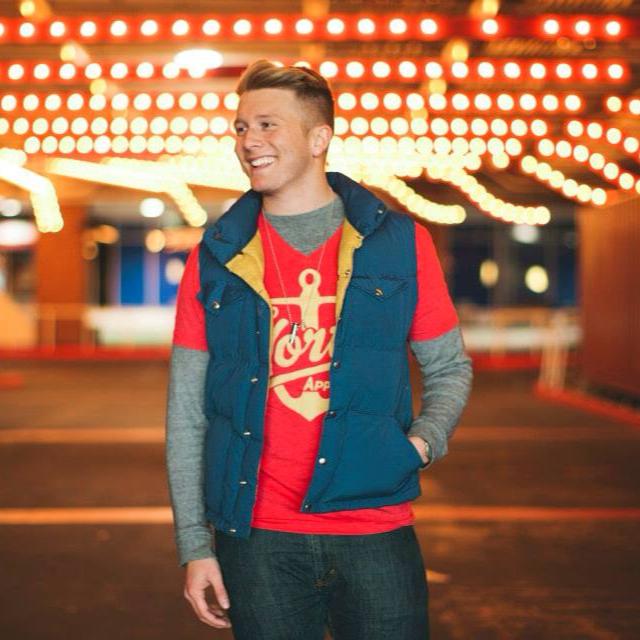 Jason Pattengale beat Crohn’s Disease to become a varsity cheerleader at IWU, but he probably never expected to become a clothing model for his youngest brother’s company.

Mike Pattengale has been an entrepreneur for as long as he can remember, selling air band concert tickets door-to-door at age nine and mowing yards by the time he was twelve. His most recent venture started not from a desire to make money, but a desire to save it. During his sophomore year at IWU, Mike went on what he later described as “an unsuccessful shopping trip” to buy tank tops for spring break. He soon realized tank tops cost an average of $30. “That really rubbed me the wrong way,” Mike says. “So I decided to make my own.”

Mike knew he needed help to design a tank top and turned to Matt Rush (’14). The two had heard of each other through high school sports in Grant County and through mutual friends. Both men later enrolled at IWU, where they became close friends during their sophomore year.

When Mike showed Matt his design, Matt got on board. “We knew we could make tank tops with more appealing designs than the ones widely available in stores and that we could sell them for half the price the stores charge – all while making a profit,” says Matt. He and Mike hashed out ideas for the company over the next several months, settling on an official design and a name.

“We chose Two North Apparel as our company name because we wanted to encourage adventure, challenge complacency, and create boldness – all the things I experienced in my time living on Hodson 2 North,” Mike explains.

Although Matt later switched to a Marketing major and Economics minor, he had a two-year background as a graphic design student. He helped convert Mike’s sketch of a tank top design into a vector image. They ordered thirty tanks with the design on them. “Aside from Mike posting one picture on Instagram … the only promotion was word of mouth,” Matt says, “We sold out of that first order in under a week.” Two North soon developed a small following, its number of customers increasing with each order.

A friend of the two entrepreneurs, IWU alum Santiago Jaramillo (’12), helped them take Two North to the next level. On Jaramillo’s advice, Mike and Matt incorporated Two North Apparel in August 2012, building a company website and creating social media accounts.

The company’s goal is to provide high-quality coastal apparel with unique design. Two North does so under the tagline “Welcome to the Midwest Coast.” Eventually, Mike hopes to expand the Indiana-based business to an actual coast. “I would love to be [somewhere like] California,” he says. Another change he would like to see for Two North is the transition from a solely web-based business to owning his own store front.

Besides bringing class and style back into the clothing industry, Two North is a company geared at helping others. “We want to encourage our customers and those around them to step out of their comfort zone, to quit playing the ‘what if’ game and start playing the ‘one-time-I-decided-to’ game,” Mike says. He believes tank tops are perfect for encouraging people to be bold, feel comfortable, and recognize their own beauty.

Part of the way Two North promotes this brand is by using customer photos. Matt explains, “We encourage all customers to post pictures of them wearing their Two North gear. So in a sense, we try to use all our customers as models.”

Mike’s oldest brother, Jason, is one of those customers. “[He] is my best friend,” Mike says. “He is also the manliest man I know. I want to encourage adventure and boldness, and he is a perfect example of that … just look at his beard!”

Besides Jason’s encouragement, Mike has also been positively influenced by relationships he formed with friends and professors at IWU. “I always [had] ideas of how to turn a profit. My time at IWU just helped me focus that,” Mike explains.

Similarly, Matt credits his involvement with Two North to Mike, Jaramillo, and IWU professor Phil Millage. He says, “The connections I made [at IWU] helped grow my interest in and love for business and entrepreneurship, while sharpening my knowledge and skills.”

Matt also refers to Two North as “the most valuable entrepreneurial experience I’ve had,” experience he is now taking with him to his new job. Early in 2015, Matt sold his share of Two North in order to focus on God’s next call in his life. He now works at Jaramillo’s company, an app creator called Bluebridge. He remains friends with Mike, and the two continue to talk about Two North business together.

As for Mike, the 2015 alum plans to continue operating Two North under its current bold, innovative brand. True to the company’s character, Mike’s advice to fellow 2015 alumni is both frank and encouraging:

“Don’t expect anything to be handed to you. Earn everything … and if you have a dream, go for it! Life isn’t about money. Dream bigger than you think is possible.”

Written by Megan Emily. Megan is a 2015 IWU alumna and operates Earthworms, a blog about finding hope and security.