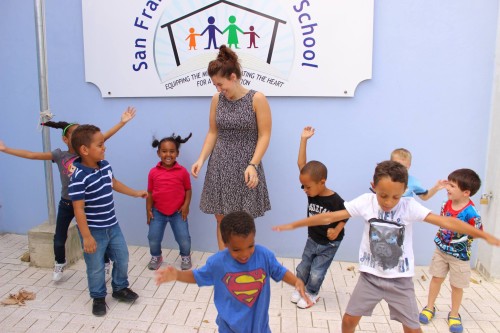 The Education Division at Indiana Wesleyan University is one of the largest academic divisions on campus. To honor the students and graduates of this department, we will be telling the stories of several alumni and how they are using their God-given gifts to teach others. Special thanks goes to the alumni that participated in interviews, the faculty of the Education Division, and to the Division Chair, Dr. Jim Elsberry.

When Ellen Kujawski (’14, Elementary Education major, TESOL and Music minors) was eight years old, she felt led by God to serve in the mission field–with no idea where that would take her. Now, Kujawski is serving as an elementary teacher in the Dominican Republic (DR) with her missionary partner, Jessica Moulding – living out her call to missions. Kujawski has always been drawn to teaching, especially for elementary students.

In high school, Kujawski fostered her love for missions by going on several mission trips –including two trips to the DR. She loved visiting the rural, sugarcane villages and participating in projects that could be sustained. She never thought that the Lord would call her to serve in the DR after graduation. Kujawski commented, “Teaching in the DR wasn’t even on my radar until TeachBeyond approached me!”.

TeachBeyond is a Christian, international organization that provides education to children and adults to benefit their futures and communities. Even though it had been four years since Kujawski’s last Spanish class, she followed God’s leading and went to the DR with TeachBeyond. Once in the DR, she said she was, “placed in a completely immersive Spanish environment,” where she had to learn quickly how to speak and understand Spanish. Dominican “Spanish is one of the most difficult dialects of Spanish to learn because the language is spoken extremely quickly,” she said. But Kujawski has learned much in the past two years that has equipped her to teach English to Dominican Spanish speakers.

Kujawski was placed with her work colleague, Jessica Moulding, in San Francisco, DR. This city is quite large, with a population of 250,000 and recent growth in commerce in the area. While there is still poverty in the city, San Francisco is quite different from the sugarcane villages usually associated with the DR.

Kujawski and Moulding were sent to San Francisco Christian School to help open and run the school as an English-immersion elementary school, beginning with Pre-K and Kindergarten. A local pastor founded SFCS and Kujawski, Moulding and a missionary family were brought in to teach and aid the growth of the school. The school opened for the school year just one-and-a-half weeks after Kujawski and Moulding arrived in the DR. Kujawski realized right away that she was not only doing the Lord’s work, but also work that she was passionate about.

However, Kujawski and Moulding were not only teachers at SFCS, but they also shouldered the jobs of recruiting and admitting students, qualifying students for scholarships, maintaining the school’s finances, cleaning the building, and more. Because of the unsustainable foundation and departure of the school’s founding pastor, they quickly realized that SFCS’s current structure would not work.Kujawski was faced was a difficult choice, she said, “[Jessica and I] were left with a choice–leave and forget everything that had happened the last year or if God was calling us to something much bigger than ourselves.”

Kujawski went on to say, “We both felt like our work here wasn’t done and for the rest of that summer we fought to keep the school alive as much as we could.” They tried to get donations and fundraise in the U.S., to acquire more teachers, and even to become a sister school to a larger school.

One of the larger schools they approached was Doulos Discovery School in Jarabacoa, a city near San Francisco. Doulos did not have the resources to accept SFCS as a sister school, but instead Kujawski said, “Doulos offered us a crazy proposition to become experts in running and planting a school in the DR by moving to Jarabacoa. We would live and learn from their school for a year before returning to San Francisco, DR.”

Although at first the move to Dolous and temporarily closing SFCS’s door for a year felt like a failure to Kujawski, she soon learned that this was a blessing. She receives Spanish classes twice a week, grows daily by teaching her own kindergarten class, and has had the opportunity to learn from a school that has been operating for 13 years doing what she wants to do at SFCS. Already Kujawski and Moulding are preparing for the re-opening of SFCS. They are gaining knowledge about their community and laws that must be in place to open the school, as well as connecting with as many local businesses and influential people as they can.

Kujawski spoke passionately about how she and Moulding have been preparing for the reopening of SFCS:

“Before, we were supporters of another man’s dream and the vision he had for the school. Once he was gone, we couldn’t just be supporters anymore –we had to become the school planters. It is a completely different role. As a school supporter, all I needed to know was how to be a great kindergarten teacher and support my ESL students. But as a school planter, everything has changed! Now I need to know my community and have relationships with its leaders. I need to be involved in the existing local schools and know what programs they are offering as well as what they wish they were offering. I need to learn how we can best support the dreams and goals of the people of San Francisco. We are not here to just give them an American education; we are here to help the community. And until we know them intimately, our school’s impact can only scratch the surface.”

Kujawski and Moulding plan on reopening SFCS in the Fall of 2017. When they reopen, they plan to offer Pre-K and Kindergarten classes and add an additional grade level each year. Their ultimate goal is to give their students a quality Christian education, and the tool of English, so that they can become leaders in their community.

During her time at IWU, Kujawski’s professors in the education division consistently poured into her academically and spiritually. She said, “[The education department] prepared me so well, not only academically to be a teacher, but spiritually to be [in the Dominican Republic] doing what I’m doing.” Kujawski remembered several faculty members including Dr. Muchun Yin (TESOL) and Dr. Anita Manwell (Elementary Education) who always encouraged her to pursue her dream of combining Elementary Education and TESOL to teach in a non-traditional setting. Kujawski said, “They believed in me, even when I doubted it was possible. And at that point in my life, that was exactly what I needed.” Additionally, Dr. John McCracken (Education) even fundraised to buy books for SFCS. Overall, Kujawski has felt the impact of her time at IWU in her own teaching and through the lasting relationships and care from faculty members.

Read Ellen’s blog for updates and more information on her time in the DR!: https://drteacher14.wordpress.com/

SFCS is also in great need of teachers (Pre-K, Kinder, 1st, PE, Art/Music, ESL)! The positions are open for the 2016-17 school year and would give an amazing opportunity to be immersed in a new culture and language. Teachers would also have the opportunity to teach a smaller number of classes before the re-launch of SFCS in Fall of 2017. Contact Ellen at ekujawski@teachbeyond.org for more information!