Do you remember the Titans? On February 14, 2015 we bring back the Titans!  It will be a weekend the IWU community will not easily forget.

Remember the Titans Men’s Basketball game is an annual tradition. Representing the athletes who have gone before us and who have begun the athletic legacy here at IWU. To commemorate this event our current Wildcats basketball team will sport the throwback uniforms from Marion College, the Titan jerseys (though thankfully, in my opinion, without the short shorts from the early 70’s and 80’s). 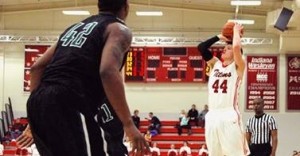 It will be an exciting game with the Titans taking on Spring Arbor. The Luckey Arena will be full of enthusiasm filled with fans including alumni of all ages.

“We have celebrate champions in the past!” says Rick Carder, IWU Alumni Relaitons Director. At the top of the list include Titan alumni, Perry Frank (1983-86) with 2,452 points and Durand ‘Speedy’ Walker (1979-82) with 2,409 points continue to hold on to their records.

A reception is planned for Titan Alumni and their families which will begin at 1:00 pm held in the Wellness Center upper lobby area (just outside of the Luckey Arena).

Wildcat Game Schedule can be found at: http://www.iwuwildcats.com/

One Reply to “Remembering Once Again – The Titans!”