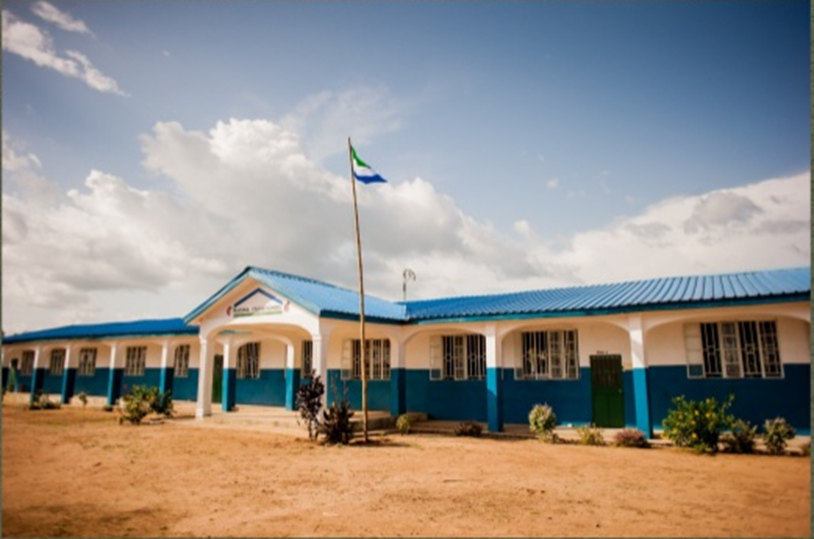 Francis Mustapha was born in Madina Village, Sierra Leone. Seven of his siblings, including his twin brother, died before age five. Francis was not expected to live, but his father heard of an educated woman who had training as a nurse. He took Francis to the clinic she had established in another village, 20 miles away, and said, “We have heard that you have been educated. Here, prove it.” Today, Francis says, “The only difference between me and my seven siblings is the intervention of this educated lady. For me, education is life.”

Although Madina children did not go to school, Francis attended a Christian elementary school 20 miles away and later a Christian secondary school 40 miles away. He graduated at the top of his class but was denied funding for college. “Because of corruption, it isn’t what you know. It’s who you know,” he explains.

When his biology teacher, Tom Davidson, heard about it, he bought Francis a plane ticket to America. Francis enrolled at IWU because Davidson had taught here. He worked on-campus and in factories to pay for school and lived with IWU professor Margaret Hodson during vacations. “She was a mother to me,” he says.

He graduated in 1972 with a B.S. in biology, a decision he credits to Davidson’s teaching skills and passion for science. However, it wasn’t until graduate school that Francis decided to become a teacher himself. In the late 1970s, Francis and his wife Bobbie (IWU ’76) taught at U.S. schools, but Francis wanted his wife to live in Africa. They moved to Liberia, where Francis taught at a university for three years while Bobbie taught at the international elementary school connected to the college. Later, the couple relocated to Sierra Leone.

As Sierra Leone’s economic and political spheres deteriorated, Francis feared for his family’s safety. “Right after we [returned to America], a ten-year war ensued,” Francis says. The war destroyed over 1,270 elementary schools, at least two major universities, hundreds of high schools, and most of the nation’s hospitals.

Francis and Bobbie continued teaching in America, but Francis’ heart remained in Sierra Leone. “I weep over the country,” he says. “If mission efforts were ever needed for Sierra Leone, it’s now.”

To save Sierra Leone, education is key: “In the current generation, corruption is all they know… They’re not going to hear. So what do you do? You focus on the future. The children.” Francis’s lifelong dream was to return to Madina and build a school. In the 1990s, he planned to turn that dream into reality.

Two attempts to build a school failed due to rebel warfare and a destructive fire. Tired of losing money and materials, Francis deferred his dream until he retired in 2011. Two weeks later, he flew to Sierra Leone with $50,000 of his retirement money to build the school himself.

With support from Francis’s home church, Good Shepherd, construction began. Project leaders built the school in phases, only progressing when they had the necessary resources. Francis was amazed to see how God provided funds; twice, Good Shepherd helped raise $60,000 in under three months. He compares his own contribution to the little boy whose lunch fed the five thousand: “My motivation was, ‘This is my two fishes and five loaves. Jesus, here it is.’”

In 2013, Bobbie came to Madina to pre-register eligible students and organize the classrooms. “That school is not going to go without her,” Francis says. Bobbie was involved throughout the school’s construction and opening. She is the one who suggested painting its exterior blue, white, and green – the colors of the national flag – and painting the classrooms bright colors, to compensate for the lack of electricity. Bobbie also made Madina Village School a sister school to Arlington Elementary, where she teaches in the U.S. Arlington students sent school supplies to Madina, and students wrote each other letters.

Registration day was difficult for Francis. “We had to turn away over 300 students,” he says. Typical classes in Sierra Leone are crowded with more than eighty students and lack supplies, making learning difficult. Madina Village School’s classes are capped at 30, with two teachers in each room, to more thoroughly educate students. “90% of the children going to that school have never been to school,” Francis explains.

Madina Village School’s second academic year was postponed by the 2014 Ebola outbreak, which shut down all of Sierra Leone’s schools. According to Francis, the most important element for combating Ebola is education. Madina Village School’s teachers and nurse – the only certified, trained school nurse in the country – held Ebola education seminars for the community. People could opt for voluntary quarantine, and outside visitors underwent mandatory isolation. “To this date, we’ve never had a single case of Ebola in that community,” Francis says.

He is proud of the role the school had in avoiding Ebola: “The school being there for one year gave us credibility … but I didn’t know [its impact] was going to be this soon or this big.” Francis plans to return to Madina for the school’s March 30th reopening.

Future plans for Madina Village School include a new well and a health clinic. Francis says having a sustainable clean water source is the school’s number one priority, because the current well often dries up. Leaders will soon begin raising funds for the clinic as well, because the closest hospital is 30-40 miles away.

Francis is grateful for how God is working in Sierra Leone: “God is the one that has the solution, [and] the solution to most of the problems is education. That’s the only hope. I don’t expect to see extreme change in my lifetime. My hope is to plant the seed.” For more information about Madina Village School or to donate, please visit www.madinavillageschool.com.

Written by Megan Emily. Megan is a senior English/Writing major and member of the John Wesley Honors College. She operates a blog (megzilla99.wordpress.com) about finding hope and security.