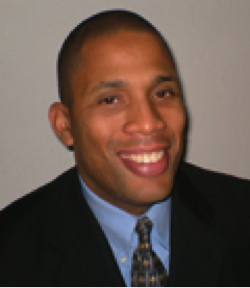 There are some people that seem to possess the ability to be defined beyond their job or profession. Indiana Wesleyan University graduate, Roy E. Alston (2003) is such a person. Holding an MBA from IWU is just part of the story in this extraordinary life. It is through this part of his journey that I have crossed paths with Roy and learned of his incredible opportunities to make a difference in people and communities.

For the past twenty-five years, Alston has used his influence to make a difference in the lives of others through his motivational speaking yet it was IWU that contributed to “Spiritual influence in my life,” shared Alston. “It was instrumental in my understanding value-based philosophy,” he added. IWU not only helped shaped my worldview but also my book idea. Knowing what you value is important” he confessed. He talked about how an IWU faculty who demonstrated value-based thinking by allowing him to bring his then, 9-year old daughter to college classes with him when he shared that he could not attend to attend to babysitting needs.

Since 1989 Alston has conducted motivational seminars that energize performance and helping people and organization for significant changes in human behavior and developing potential. Long before he decided to influence people, he himself was shaped and mentored by men and women of caliber influences in his life. In 1989 he attended and graduated from the United States Military Academy at West Point with a BS in leadership. Confessing that his priorities were mixed up. He shared that, “when I came to Indianapolis all I wanted to do was make money but I was not happy“. It was a value-based professional that told him just before he was downsized that he needed to “go live your life’s purpose”. Within just a few months of completing his IWU degree he wanted to be a Law Enforcement Officer. With just 30-days his home sold and he was moving to Dallas. Alston shared, “That helped me be receptive to spiritual values and I realized that I needed to be a better person.” He has used his military and law enforcement to develop his manifesto, a value-based leadership philosophy. He has crafted principles into a leadership training that is used by Law Officers as well as civilian institutions. About his change in heart and values he stated that the, “military informed me but my IWU experience was the capstone that shaped me, forged into me what I am today.”

Roy’s military service is impressive. He served in the US Army as a commissioned officer with the 82d Airborne Division. Roy served in combat with the 1st of the 319th Field Artillery Regiment during the first Gulf War. Roy is a graduate of the US Army’s Ranger School, Airborne School, Jungle School, Field Artillery Officer’s Basic Course, and the Field Artillery Officer’s Advance Course. Soon after Roy earned his MBA from Indiana Wesleyan University he received his doctorate in management with a specialization in leadership and organizational change from Walden University in 2011.

Bringing all his experiences and training into one place he decided to author a book. Alston’s book, “The Leader’s Compass for Law Enforcement Professionals: A Values-Based Approach to Influencing People” has been used by military, paramilitary, corporations and civilians to learn the principles of making a difference in the lives of people. “This book is designed for law enforcements officers but these principles are about leadership first and foremost” says Alston. Traveling all across the country he has been able to share his journey and help police departments understand the importance of accomplishing goals, improving their organizations and applying this training to the advancement police officers. A re-write on leadership was inspired and permission was granted by author of a companion book written by Dennis Halley. Alston remembers thinking, “I was granted permission to re-write the

book that could help police officers understand value-based thinking. We must have a compass set to true north, look inside self to discover what true north values are.”

In recent days we all were once again reminded of the incredible risk law enforcement officers take to protect and serve our communities as we were stunned to see and hear headlines of rookie officer Ashley Marie Guindon who was shot and killed on her first day weekend on the job.  According to The Officer Down Memorial Page, Inc (ODMP) there is a 1100% increase in gunfire fatalities of officers in 2016. This organization is committed to “Remembering All of Law Enforcement’s Heroes” This is especially concerning and in-part why Roy Alston travels the country to meet with Chief’s Associations and provide training that can help officers. Alston reflected on this tragic news by stating that “the reality and importance of our jobs is vital. We owe police officers the best training we can provide because they are called to give the ultimate sacrifice.” He added, “We are often forced to question everything in our procedures and police practices because “it is paid by someone’s blood and we should respect this.” In answer to my question on what can we learn from this? He liked it to aviation, “Mistakes happen and we must learn from every tragedy. Everything should be questioned both technically and tactically to better train officers.”

It was here in Indianapolis, Indiana that I caught up with Alston. After picking him up from the Indianapolis Airport I was able to capture more of his story beyond the impressive titles and education. We can’t help ourselves but think about the incredible issues facing communities and law enforcement officers. For most of us we read the headlines but for Alston and his fellow Dallas PD officers these kinds of tragedies are real. While still serving his local department in Dallas as a Lieutenant of Police, he can training nationally value-based leadership. “We have to be able to influence our actions for the positive” comments Alston. “What you believe is demonstrated by your actions and behavior” he adds. About his local role he talked about the Dallas, Texas Police Department he shared that we are not all that different from other cities. “We have our share of issues but across the country we are seeing enormous and even epidemic issues that confront us as a nation” says Alston. The solution is in value-based leadership in which his book helps deliver.

“The primary mission of the basic police officers course as outlined through the Collin County law-enforcement academy, can be articulated in a two – fold manner. One, to prepare the participants to serve the needs of the community and to uphold the laws of society. Two, deliver a quality, entry – level training program.” (- Roy Alston from his LinkedIn profile)

Alston is an affiliate keynote speaker with Academy Leadership in which he prides himself and delivering top notch leadership development and provide management training to senior executives, managers, and supervisors in a range of organizations that include law-enforcement in which he has served for over these past six-years. It is through this organization that Alston travels the country speaking to law-enforcement professionals. His colleagues obviously find value.

“ Roy is an amazing leader really walks is talk of integrity and personal effectiveness. His dissertation was excellent and I have seen him really step up to the plate with a very controversial in challenging piece of work.” –Professor in Mentor David banner, Walden University

While in the Indianapolis area he had the opportunity to speak to the Police Chiefs Association. It was during this time that he was able to address some of the most difficult of community issues and concerns confronting law-enforcement today.

“Roy is a breath of fresh air and a crowded room. He has personally been a motivating factor in the lives of servicemen and women across the country in the United States. His leadership is unparalleled and he has demonstrated his servant heart on many occasions. There are very few people who are as authentic and genuine as Roy.” Damon Jackson, Police Officer, City of Fresno. (Having worked directly with Roy at Collin County Law Enforcement Academy)

It was a real honor to have dinner with IWU grad, Roy Alston and hear how he is making a difference as an IWU World Changer. IWU has been training Law Enforcement professionals since the mid to late 70’s. The growth of the Criminal Justice program continues to grow both on the Marion residential campus as well as online adult education program. I salute all of our alumni serving as police officers, probation professionals, and related criminal justice careers. On a personal note, having two son’s serving in Criminal Justice professions has especially been exciting for me. For over five years I had the opportunity to serve as a Police Chaplain while living and pastoring in the suburbs of Chicago.

Written by Rick Carder, Director of Alumni and Church Engagement.