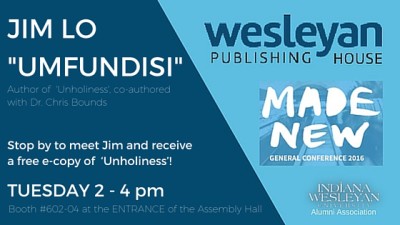 Jim “Umfundisi” Lo, has long been connected to Indiana Wesleyan University. He received both his

bachelor’s and master’s degrees from IWU. Previously, Lo served as Dean of the Chapel, however he now possesses a role that allows him to interact more one-on-one with students as Professor of Intercultural Studies in the Christian Ministries department and Campus Life Pastor at IWU.

After graduating with his bachelor’s degree from IWU in ministry, Lo and his wife Roxene travelled to Africa as missionaries. They were soon faced with the reality of addiction and spiritual warfare that was rampant in the third world culture. Lo recalled, “During a baptism service someone started going spiritually crazy on us.” He continued to descibe the aftermath of this encounter, “We had never faced spiritual warfare that manifested itself in addiction and direct contact. We lost credibility with those who we were serving and realized we had a lot to learn.”

Lo and his wife returned to the States and received their master’s degrees, all the while learning everything they could about spiritual warfare. They were more equipped to serve that population, but Lo realized upon returning to the United States after being a missionary that spiritual warfare was also an issue in western cultures.

“We as a Western culture are a little afraid about talking about [spiritual warfare],” he said. He

away at your confidence, making it difficult to find peace.

Through the book Unholiness co-written by Lo and professor Chris Bounds, they each unpack the idea of spiritual warfare and how it can cause turmoil in one’s spiritual walk. Lo said, “Dr. Bounds and my aim is to look at the stuff that can cause someone to come into the realm of unholiness. Your focus should not be on negative things, it should be on hope–and hope comes from the cross and resurrection. Because of that, we can live in victory because of what Christ has done for us.”

Lo and Bounds’ book focuses on creating awareness of the negativity and warfare around Christ-followers. They do this by telling stories and examples they have learned during their time in ministry–Bounds as a pastor in America and Lo as a missionary in Africa.

Unholiness serves as a helpful resource for the Church and Christians everywhere. Lo said, “In some ways what the book is saying is that the church needs to intentionally be alert not to let [sin] influence your life.”

Stop by the Alumni Booth, located at the entrance of the Assembly Hall (Booth #602-04) on Tuesday, June 7 from 2-4pm to meet Jim “Umfundisi” Lo and receive a free e-copy of Unholiness.