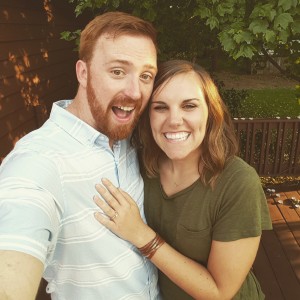 Brittany Hobson graduated from Indiana Wesleyan University with a Bachelor’s degrees in Social Work and Addictions Counseling in the spring of 2015. She believes her education in these two areas was enough to prepare her for graduate school. Hobson left the IWU environment feeling confident in her skills, abilities and gifts.

Throughout the years she spent at IWU, Hobson became involved with organizations that fought sex trafficking. “I connected with other people at IWU that were passionate about fighting social injustices in the sense of human trafficking,” she said. Over the years, she believes she gained knowledge and insight on that specific injustice and planned to pursue a career in helping those victims.

Originally from Wabash, Hobson returned there upon graduation from IWU. Hobson accepted a position at Compass Rose Academy, which is a school for troubled teenage girls. She lived for a year as a house mom for the girls there. A house mom is someone who lives alongside the girls at Compass Rose and accompanies them through their everyday life. “Through that experience, I really learned how to be the hands and feet of Jesus. I learned to really sit in people’s pain with them as they work through the hard things in life,” she stated.

Currently, Hobson is attending graduate school at IUPUI, which she began in May of this year. She will receive a Master’s of Social Work with a focus on children, youth and families. She is currently interning with Restored in Indianapolis. This is a nonprofit agency that works with girls that have been victims of sex-trafficking in Indiana. After graduate school, Hobson has plans to receive her licensure and then work with young girls and women who have endured all types of trauma.

Hobson spoke of three main seasons of her life and the lessons God has taught and is teaching her in the midst of all of them. “At Indiana Wesleyan, I definitely grew in my faith more. I experienced living among other Christians. We lived out our faith differently and that is OK,” she stated. When speaking about her time at Compass Rose, she said, “I think God just really showed me who I was. He showed me how to love people even when it is hard. He was very gracious to me during that time.”

For now, she said, “God is showing me how I have the advantage of praying for my clients without them knowing. I get to work with them and empower them and fight for them, but then outside of work, I get to ask for God to work in their lives. This is something powerful that we as Christians get to do.” She believes God is teaching her to be His hands and feet, but then to rely on Him for intervention in the midst of that journey. Hobson listens closely to God, as He guides her throughout her daily tasks, and also, the grand plans He has for her life.