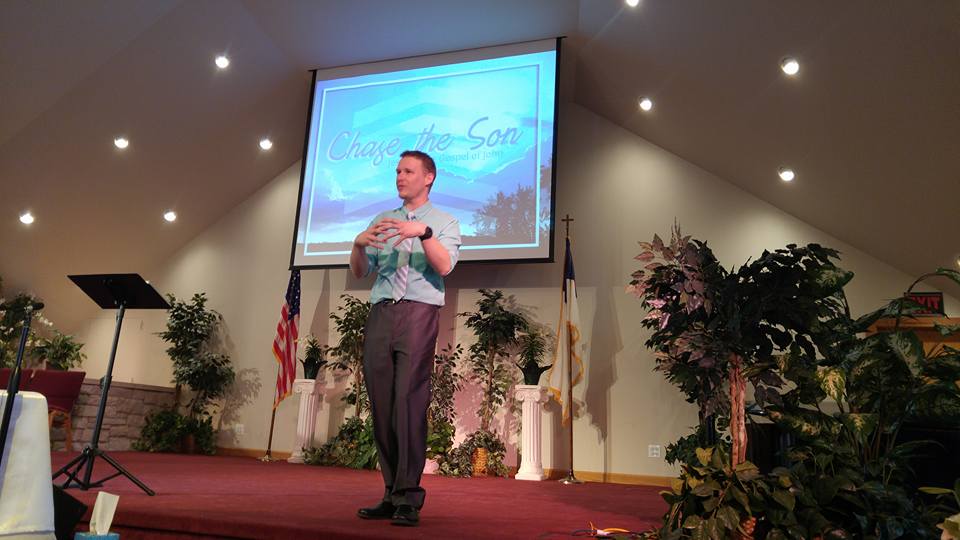 Wickstrom credits his years at IWU as some of the greatest and most formative years of his life and ministry. Reflecting back on his time as a student, Wickstrom had quite a few classes and professors who heavily influenced him and his experience at IWU.

“I’ll never forget Dr. Smith’s focus from day one to show students the grace and love of God the Father evident in the pages of the Old Testament,” Smith said. “I ended up taking every Bible class I could fit in my schedule the next four years with Dr. Smith, and have been greatly impacted by his love and passion for God’s Word, something I hope to instill in those I have been fortunate enough to lead in ministry ever since.”

Other classes that were Wickstrom’s favorites included Post-Reformation Church History and History of the Wesleyan Church, taught by Dr. Bud Bence. Wickstrom said he had never met someone who could make history, issues, and trends come alive with such heart and intensity.

Wickstrom was also able to learn from and work with Pastor Steve DeNeff.

“I also consider myself very fortunate to have been able to learn from and refine the gift of preaching under Steve DeNeff,” Wickstrom said. “Both the opportunity to sit under his leadership as the pastor at College Wesleyan Church, and to learn directly in Homiletics class have been an immeasurable asset to finding my own style in teaching God’s Word to a congregation, whether they were teenagers or adults.”

Overall, Wickstrom said he loved the religion faculty as a whole, as he learned a lot from each of them.

In addition to being taught in his classes, Wickstrom also loved his campus job, working with the maintenance department. Even this job gave him important life lessons and lessons to remember as a pastor.

“It allowed me to meet a lot of people, see a lot of the ‘behind the scenes’ areas of the college, and change a whole lot of light bulbs…including spending one Christmas break changing the bulbs in the ‘star ceiling’ of the PPAC,” Wickstrom said. “In some ways, the job gave me a greater appreciation for men and women who serve God and the Kingdom from a different angle than those with college degrees.  It gave me an appreciation for tradesmen and skilled laborers.”

After graduation, while he was serving in the Florida District leading the District youth ministry, Wickstrom knew he had chosen the right path in becoming a pastor.

Wickstrom said he will always treasure memories of listening to students’ testimonies around the campfire on the last nights of youth camp, because it was in those moments when God confirmed Wickstrom’s calling and His involvement in Wickstrom’s ministry.

“It is so exciting to watch God reproduce ministry in the next generation of leaders who are carrying the church forward,” Wickstrom said. “It’s been such a delight to help them understand their calling, get involved in ministry, explore education options, and begin preparing for the future God is leading them towards.”

Today, Wickstrom is the Lead Pastor at Wesleyan Community Church located in Oak Lawn, Illinois and has been since August 2015. There, he also serves alongside his wife, Kristia– also an IWU alumna– who is the church’s assistant pastor.

Wesleyan Community Church neighbors the southwest side of Chicago, putting them in a unique place demographically, allowing their church community to be immersed into a variety of cultures and nationalities, such as Polish and Middle Eastern families. Even socioeconomically, the church is near both oppressed neighborhoods from the southside of Chicago, and affluent suburban communities in the opposite direction.

“We have taken on the challenge of trying to build relationships with our neighbors and build bridges of helping our neighbors connect with one another, break down fears and uncertainties of people who are unlike themselves, and do it all in the name and love of Jesus,” Wickstrom said. “It is definitely both a challenge and exciting for our family.”

The church also has a wide age range from a more elderly side, to the six infant dedications Wickstrom has been a part of in his year and a half of pastoring the church.

“We are very blessed with a wonderful church family who continues to be supportive and welcoming to all who enter through our doors. We are known as a very friendly church, praise God!” Wickstrom said. “Our goal is to get all people connected at whatever stage they are at in their faith journey, disciple them, live life alongside them and lead them to make a greater impact in our community for Christ.”

However, being a pastor does not come without difficulties. Throughout this process, Wickstrom has learned a lot about himself.

Wickstrom has had to learn to know and accept that not everything has to be perfect in both life and ministry–including himself.

“Growing up, I was pushed to excel, especially in the area of academics.  For the most part, it has served me well in life.  One drawback however is a general fear of failure. Having a personality and temperament that leans towards the analytical exacerbates that difficulty, as I really like to think through issues and situations and try to make the best choice possible,” Wickstrom said. “So while I’m still a work in progress in that area, I am continuing to let God refine me, to offer him what I have, and to try to be involved and active before always having the perfect answer or plan for every problem or situation in life and ministry.”

“No matter what major you choose, allow God to call you to a community, and place a priority on being used by Him in partnering with a church and pastor in that community to build the Kingdom of Jesus Christ and bring transformative hope and restoration within it,” Wickstrom said.

Wickstrom said he believes wonderful Christian men and women graduate from IWU in a variety of different majors, but students will often graduate and simply try to find a job, rather than dedicate themselves to the “Great Commission” calling.

“The Kingdom isn’t just built by religion students, but by men and women of every field of study working together to bring hope and transformation that reflects God’s heart and brings glory to Jesus Christ,” Wickstrom said. “Not everyone is necessarily called to be pastors, but people are needed to come alongside pastors, to engage with the community at large, and to place a Kingdom building mindset as the priority of life. As someone has once said, ‘seek to make a life, rather than just to make a living.’”