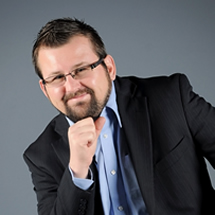 Chad Malone is a two-time graduate of Indiana Wesleyan University, once with a bachelors in Management with an emphasis in communications in 2007, and most recently with a masters in management in 2009.

Chad’s pursuit of higher education was a longer road than some take. The first time he began his undergraduate work he flunked out, and the second time around he left because of the financial strain he was under. He then returned to education as an adult student and enrolled in IWU, becoming a student at the Columbus campus.

Malone enjoyed his time at IWU and said that his instructors came along side him to encourage him and explain how to improve, instead of simply telling him improvement was needed. He never doubted that they all had his best interest at heart. He also appreciated that all of his classes, which mainly consisted of those within the business school, all incorporated the bible into the course work. He felt spiritually prepared for the business world after leaving, and he stated that the “spiritual aspects of class prepared me for real life.”

While at the university, Malone was especially influenced by his Human Resources professor named Jame Surges. She advised him to focus less on a surface level goal, like having his own company, and to focus more on the bigger purpose: transformation. Surges also prayed for Malone and asked specifically that God would open up doors for him to pursue the higher calling he felt. Shortly after, Surges introduced him to Dr. Larry Lindsey who then got him in contact with the late motivational speaker Zig Ziglar. Through his time knowing Ziglar, Malone gained lots of knowledge about the art of motivational speaking. Through the one professor at IWU, who invested a little extra in Malone, he was launched into his professional career.

Today, Malone is a passionate author, motivational speaker, and leadership trainer. He travels the country, speaking most frequently at non profits and prisons. This month, Malone will speak abroad for the first time, on a trip to Uganda. The basis for the speeches he will give at this conference inspired him to write a new book on leadership called “Leaders Set an Example.” It is written based on 1 Timothy 4:12 and how to, according to Malone, “step up, step out, and step in the gap” in speech, conduct, love, faith, and purity. The book will be released late this year or early next. This will be the second book Malone has published, the first being “ Find Your Passion From the Inside Out” which was released in 2013.

Malone’s faith is the biggest influence in terms of what motivates him in his career. He knows he has a bigger purpose and strives to make an impact for the kingdom with his life. IWU’s World Changers Society is something that made a big impact on his life, because he was able to see tangible ways people were answering their call, and following their passions, resulting in a bold life for Jesus’ glory.

As a motivational speaker, Malone is always seeking for ways to pass on encouragement and godly wisdom to those who seek it.

To current students he gives advice to realize the power that your words have. He said that “we are all made of words– watch what you say and how you say it. Build people up; it’s time for us as the Body of Christ to step up and make a difference.”

He also wanted to especially encourage those who come from rougher home situations or have had difficult pasts. “No matter where you came from, you can change your path with God’s help,” he said. “You are not destroyed. Be willing to step up to the challenge and go out of your comfort zone.”

To find out more about Chad D Malone’s career, how to purchase his books, or inquire about hiring him as a speaker or leadership trainer, please visit chaddmalone.com.

Written by Kendra Housel, a writer for the Alumni Center. Kendra is a sophomore Education and Honors Humanities double major at Indiana Wesleyan University in the John Wesley Honors College. She is also a member of the University Chorale. She is passionate about serving Christ through writing, singing, and caring for others.