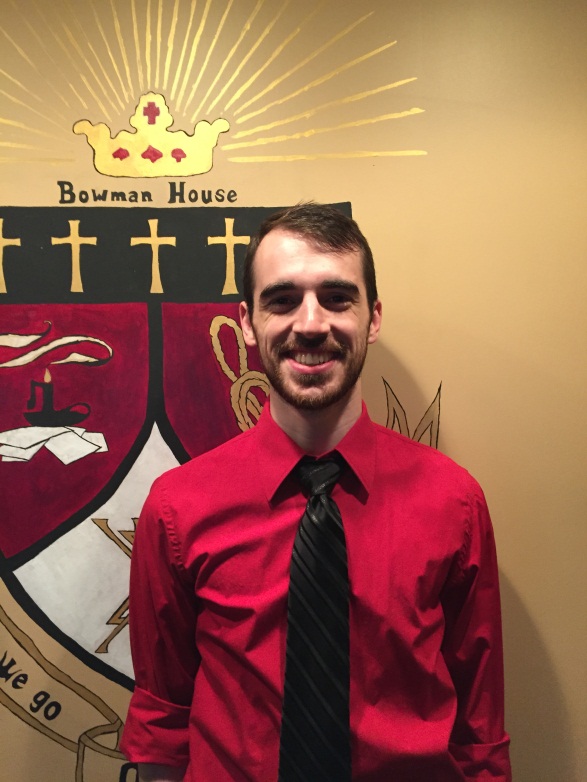 Two-year-old Uriah asks, “Can we go to the lobby?” He loves playing in the lobby of Bowman House, where his father, Luke Johns (’11), is the Resident Director. Luke and wife Lauren (’11) are expecting their second child in June.

Luke, who became the RD in 2012, is no stranger to Bowman. As a student, he lived in Bowman for four years, filling the roles of resident, Events Coordinator, RA, and ARD. “I climbed the ResLife ladder,” he explains.

Bowman had a strong impact on Luke, because it’s “set up to mentor young men and teach them what it means to live in community.” Jared Begg, the former RD, was also a positive influence: “There’s a temptation in Christian culture to fake it. You want to look the part. But [Jared] didn’t try to make us think he had it all together.” Jared’s openness inspired Luke to be equally honest when he became an RD.

On a typical day, RDs have one-on-one meetings with 2-3 students, plus several business meetings, packed in around office hours and hours spent in the hall, interacting with residents. Fulfilling an RD’s role is a never-ending responsibility. “You could work 60-70 hours a week if you wanted to,” Luke says.

To balance his schedule, he counts on the ResLife staff to help mentor residents: “My target audience is my staff … The majority of my time is spent developing [them] so they can develop the residents.” Staff involvement is instrumental in providing a positive influence in the lives of Bowman’s 100-plus young men.

Luke’s favorite tradition is the beginning-of-the-year House Retreat. After watching White Squall together, staff and residents camp out at Ketcham Woods. “We play games … We go over the pillars of Bowman House and tell stories,” Luke says.

The community-building that begins at the House Retreat continues all year. When moving on to other dorms as sophomores, former residents tend to remain friends and roommates. “A lot of times, they travel in packs,” Luke says. But he hopes that they will open the Bowman community to include others.

Bowman is unique in how it brings young men from diverse backgrounds into close proximity and works to draw them closer to Christ. Its powerful impact on its residents is obvious, especially as they grow and influence the rest of IWU’s campus. However, following the 2014-2015 academic year, Bowman will no longer be open to undergraduate housing.

To commemorate Bowman House’s rich history, the dorm is hosting the Bowman House Reunion and Celebration. On Friday, April 10th at 6:30 p.m., Bowman alumni are invited to Ketcham Woods for an overnight camping trip to reminisce about past Bowman retreats over a bonfire, games, and the Bowman Book. Next, Bowman alumni are invited to the Henry West Banquet Rooms from 6:00 p.m. to 8:00 p.m. on Saturday, April 11th for a banquet and time of sharing memories. The celebration will move to Bowman House at 8:30 p.m., where all are welcome to hang out, look at old pictures, and join in Roots-A-Palooza (a.k.a. Brew Night).

Check out the event details here!

Written by Megan Emily. Megan is a senior English/Writing major and a former resident of Shatford House, the sister dorm to Bowman. She operates Earthworms, a blog about finding hope and security.