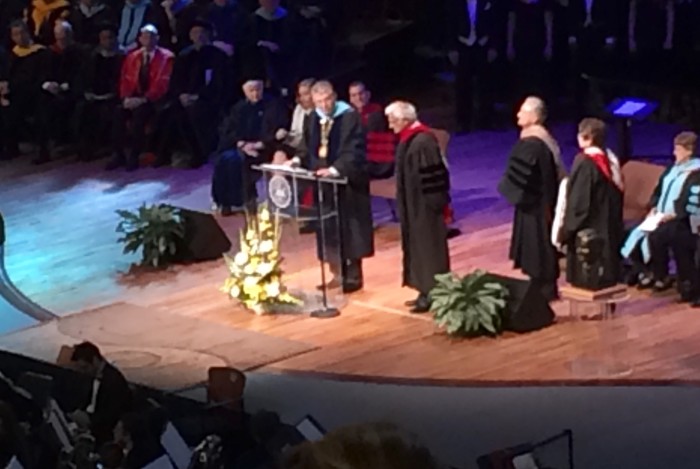 This morning, the Indiana Wesleyan University faculty, staff, board, students and alumni joined in celebrating Ravi Zacharias’s ministry. Zacharias was inducted as the thirteenth member of the prestigious IWU Society of World Changers.

The Society of World Changers is described by IWU as this:

Dr. Ravi Zacharias exemplifies the World Changer mentality through his efforts in international ministry. Zacharias serves as the founder and president of Ravi Zacharias International Ministries (RZIM), which was founded over 30 years ago. He has served in many prestigious locations all around the world. In addition, he has served the world by writing many books and conducting radio shows – all translated into many different languages. For more information on Ravi Zacharias’s accomplishments, visit his website here.

As always with the Society of World Changers Ceremony, there was much excitement in the air. Attendees were ushered into the chapel by the sound of the IWU orchestra. Shortly after, faculty entered the chapel in their academic robes and the service began.

Dr. David Wright, President of IWU, gave introductory words of Zacharias as well as welcomed all in attendance. Rebecca Noveroske, student body President for the Student Government Association, then gave an invocation prayer. This time of prayer reminded everyone as to the significance of the Society of World Changers as a mission from the Lord to be a light for Him to others.

After a brief history of the Society, Dr. Carl Shepherd, Chairman of the Board for IWU, introduced Dr. Ravi Zacharias and Dr. Lenny Luchetti, Associate Professor of Proclamation and Christian Ministry at the Wesley Seminary. Zacharias and Luchetti had an insightful and sincere conversation about the necessity of grace and honesty in Christian apologetics, the need for a change in the way education is viewed, how there is a divine purpose for all who call on the Lord, and the significance of having a Christian institute as great as Indiana Wesleyan University.

Several quotes from Zacharias’s conversation with Luchetti can be found here on The Sojourn as well as on the IWU Alumni Association’s Twitter feed.

The University Chorale, led by Dr. Todd Guy, Division Chair of the Music division, then performed two songs that inspired the crowds and showcased our talented students.

After the performances by the Chorale, Zacharias was conferred an Honorary Doctorate of Humane Letters degree by President Wright and Chairman of the Board Carl Shepherd.

A benediction was offered and the crowd was dismissed. All in attendance were inspired by Ravi Zacharias’s words of wisdom and grace. Zacharias exemplifies what it means to be a World Changer and will serve as a great role model for the students at IWU.

Hover over each image to view the description, click to view a larger version of the image: