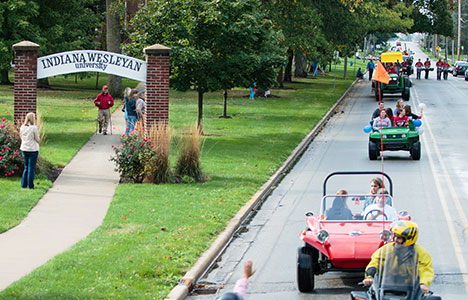 Homecoming festivities are right around the corner. With the many festivities of Homecoming, the Indiana Wesleyan Staff is working hard to finalize details. The Homecoming weekend will host a number of events including a the Gaither Vocal Band concert, class reunions, athletic events, along with a parade, including a kazoo band.

The original parade dates back over 70 years and expanded off campus and into downtown Marion. However, this year’s parade will mainly stay around campus. Members of the parade will include those from the community and campus. Examples are campus police, ROTC, President Wright and his wife, Homecoming Court including king and queen, a few residence halls, and various groups around the community. 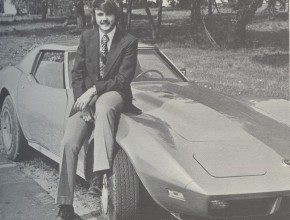 Phil Talbert, a member of the IWU class of ‘74, plans to attend the parade and drive his corvette in it. Talbert bought the corvette himself the year of his college graduation, and it still remains in its original pieces. In 1973, weeks after placing an order for the car, the members of General Motors went on strike. “I wrote a letter to the District Manager of GM here in Indianapolis and told him that I was graduating from college, I had always wanted a corvette, and I wanted to see the USA from my Chevrolet. That was the saying back then,” Talbert said.

The parade will also have a kazoo band. Rev. Rick Carder stated, “Traditions are exciting. We hope that students will engage in this opportunity to bring as many people to the parade as possible including students and alumni. We will have a kazoo band “Grand Marshall” Paul Simpson to participate, who originated this in tradition in 1977 & 1978.” To learn more about the history of the Kazoo Band, read here. 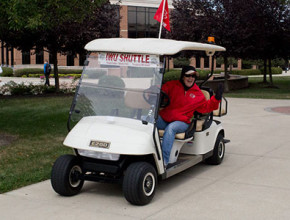 The parade is scheduled to take place Saturday, October 8 at 1:00 PM. Participants should arrive at at Philippe Auditorium by noon to line-up. Participants can be from either the community or IWU. To submit an entry for the parade, visit . Prize categories include Most Unique, Most Wildcat Spirit, Best Walking Entry, Best Community Entry, and Best Student Entry. Winners are awarded $100.00.