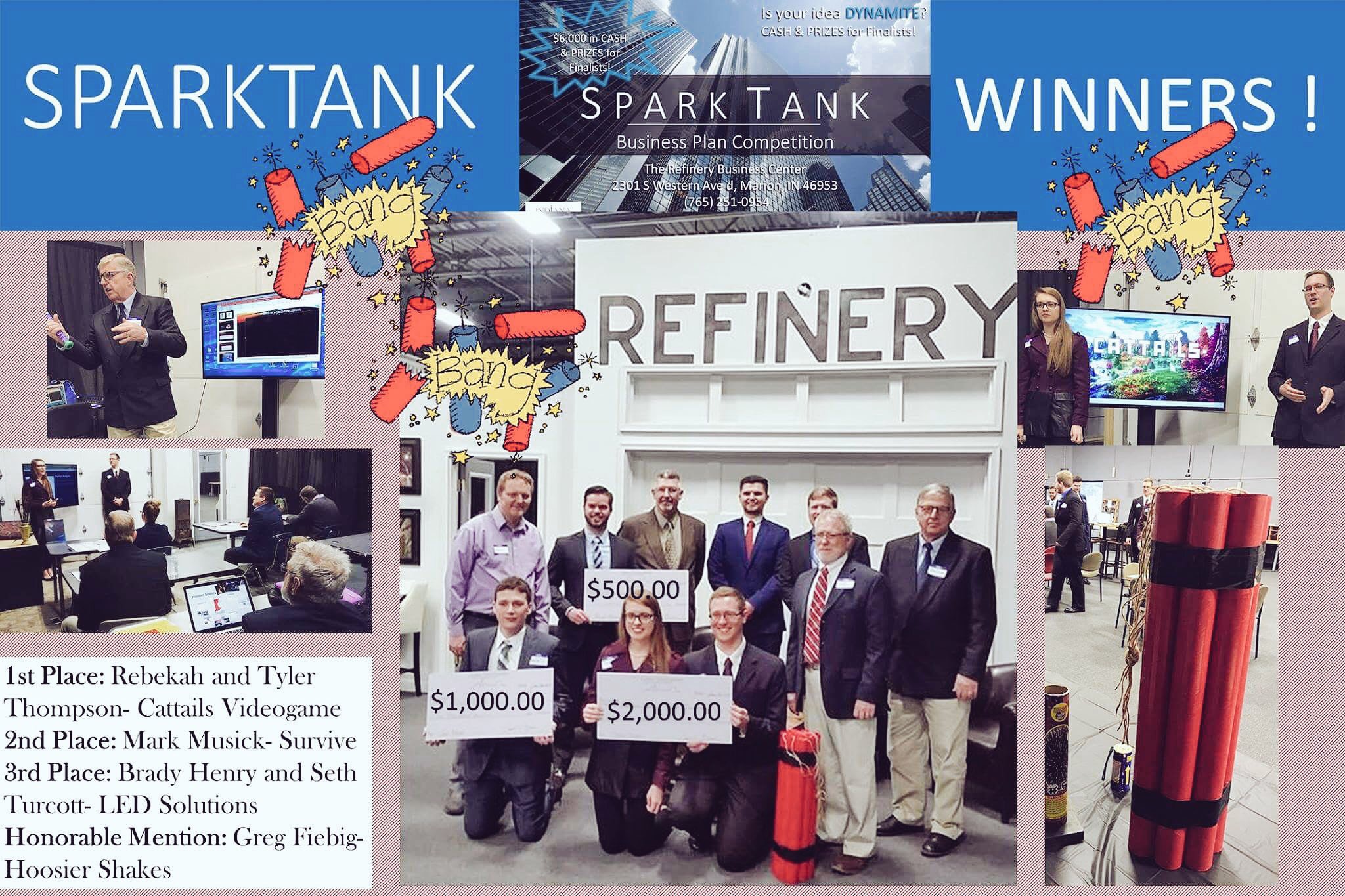 The Refinery Center in Marion is a co-working space started by Marion native Shelby Bowen, VP of Development at construction management and development company Envoy, Inc. Bowen, who now lives in Fishers and still has much of his heart in his home town of Marion.

“I have a passion for Marion,” shares Bowen, who was inspired by what he observed at Launch Fishers while working for the city of Fishers. “I kept seeing Indiana Wesleyan University students and faculty from Marion inside of Launch Fishers and thought about doing something similar in Marion.

“We were excited about the prospects for The Refinery from day one and continued to see them build on their initial concept,” says John Wechsler, Founder of Launch Fishers. “The Refinery is a great example of the kind of partnerships we had hoped for when we started back in 2012.”

Given what was happening with Launch Fishers, it became clear that a new means of economic development was underway, with a happy side effect of establishing a strong sense community that could be replicated in other parts of the state.

With financial support from the Community Foundation and Indiana Wesleyan University, a former pool hall was transformed into The Refinery. Jim Swan, who owns the building, understood the concept and worked with The Refinery on their financial constraints of starting a co-working space. The Refinery offers low-cost monthly access without long-term leases. The amenities include Wi-Fi, professional environment with other like-minded professionals, conference rooms, dedicated workspace, and an on-site cafe.

When Bowen started The Refinery, he wanted the Center to take on the character of the community in Grant County, a place with a deep history in manufacturing and service industries. Dawn Cooper-Bowlds, of Dawn’s Cleaning Solution, was the first member to join after The Refinery opened late September of 2015. Prior to being a member, Dawn had researched where to have her office. She was doing her paperwork in her car while she traveled the region, doing interviews for new employees in restaurants. She discovered The Refinery on Facebook.

“I was looking for a space just like this one,” shares Cooper-Bowlds, who held a ribbon cutting event at The Refinery to celebrate her business. “I do my interviews here, held our Christmas party here, and I love the professionalism of having an actual business address. This adds a level of professionalism to my business. There resources like office equipment and supplies that I can use. For all of these reasons and more make my membership well worth it.”

“It is critical to have resources to utilize for a business, like Dawn’s Cleaning Solution.” states Bowen. “Dawn’s business epitomizes the fact that you don’t have to be a tech company or want to start, build, or create an app to be a member of a co-working space.”

Cooper-Bowlds is from Marion and when she started her own business, she readily found more commercial and residential cleaning clients further south and had considered moving to where her initial client base was established.

“My heart is here,” shares Cooper-Bowlds, which is a common sentiment. “It takes more time in a smaller town to establish a service-based business as there is a stronger element of personal relationships and feeling comfortable working with someone. It has taken a little longer to catch on here in Marion, but now I work mainly in Grant County and surrounding areas. I still have a lot of business in Hamilton and Marion counties, but my heart is here.”

Dawn’s Cleaning Solution has expanded their services and has additional staff, with Cooper-Bowlds crediting The Refinery for that growth, given the resources she has needed at an affordable rate. In addition, thanks to the Indiana Co-working Passport, other co-working spaces, like Launch Fishers, are available for her to utilize.

Working in a community where I don’t live and having the ability to walk into an ‘office’ that I already am a member of is valuable,” says Cooper-Bowlds. “Since becoming a member of The Refinery, we have quadrupled our corporate accounts and added two full-time employees. We have greatly expanded our commercial and residential cleaning services.”

Carl Nichols, of Creative Financial Design, independent – Coveted Investment Mgmt. work through a registered advisory firm, has a dedicated office space upstairs at The Refinery for over a year.

“Over the years, I have mostly worked from home and out of restaurants,” says Nichols. “There were challenges with meeting with clients if unable to meet in their home and spending a lot of time on the road is not efficient. The Refinery provided a solution. There is an elevator, which is helpful in accommodating my clients.”

Nichols also takes advantage of the Indiana Co-Working Passport. He travels to Ft. Wayne, South Bend, and Indianapolis frequently and is able to work out of partnering spaces.

“There is a definite need for places like The Refinery. Before this opened, we had nothing like this in Marion. It’s expensive to rent office space, pay utilities, etc., is expensive,” shares Nichols. “I love having this access.”

Jess Holland, Director of Community Relations for The Refinery, is another Grant County native.

“I love it here, I didn’t have a ton of background in entrepreneurship but I have a heart for Marion, and this [The Refinery] helps our community,” shares Holland. “We are working hard to make this work, but Marion is worth it.”

Holland was first introduced to The Refinery when she volunteered for Eleven Fifty Academy’s Cool Coding Awareness Week, made possible by a Skill Up grant from the Indiana Department of Workforce Development. The Refinery played host to approximately 175 kids / participants and 20 volunteers who teamed up to introduce coding skills. Since the Cool Coding Awareness Week, The Refinery hosts a Coder Dojo the 3rd Wednesday of each month for students. They host nearly 20 kids on a monthly basis.

Jason Lowmiller, founder of Lowmiller Consulting and a friend of Holland’s, walked into The Refinery and upon seeing a sign for the Coder Dojo said, “I have been looking for a Coder Dojo! There is one in Indy but there’s one here? I want to be involved with it!”

The enthusiasm is catching.

Holland volunteers at the local library and has worked on establishing another Coder Dojo at the library. The resources are there, and Holland is planning on fun activities joining both Coder Dojos upon completion of a project. The Coder Dojos are overseen by TechPoint Foundation for Youth, based inside of DeveloperTown in Indianapolis.

“We are very excited about it!” says Holland of the addition of the 2nd Coder Dojo in Marion.

Lowmiller and Victor Vinluan, who works with Lowmiller Consulting, have an office in the loft of The Refinery. Their company focuses upon information security.

“We focus upon solutions for our clients to mitigate threats to their business, whether it is cyber security, equipment failure, hacking, if they lose a server, basically anything that would threaten a business,” says Lowmiller, who teaches at Ivy Tech Community College and at Indiana Wesleyan University. “When I was a student, I was the guy sitting at the back of the classroom facilitating the blue screens for the rest of the class, smiling.”

Another member of The Refinery is Gary and Missy Helton, owners of A’s Bakery and Catering. Given that the building used to be a bar & grill, the back kitchen is utilized by the bakery. A’s Bakery specializes in custom cakes, weddings, birthdays, all occasions, cupcakes of all flavors, brownies, rice crispy treats, and candies. While they are wanting new signage, traffic has picked up. Gary recently participated in a pitch competition, Spark Tank, sponsored by Indiana Wesleyan University.

Thanks to a grant from Lilly Endowment, Indiana Wesleyan University facilitates entrepreneurial events at The Refinery. Spark Tank, a pitch competition was held January 28th, with the winner receiving $2000 for their startup. Tyler and Beka Thompson, creators of Cat Tails Game, were selected as the winner of the 8 participants that had competed.

“This program is funded through the Lilly Endowment’s “Accelerate Indiana” grant, which seeks to encourage entrepreneurial activity among students and local entrepreneurs,” says Carol Brown, Associate Dean of Life Calling & Career at Indiana Wesleyan University. “We fund internships, even if the company is a student-run business with the goal of creating jobs in Indiana.”

The Spark Tank pitch competition was opened to public, allowing local entrepreneurs to participate. Students and faculty of IWU were included. Tyler graduated from IWU with a computer science degree and is working for the university as a developer. Beka is finishing her degree in computer information systems. Together, they have been developing their game, Cat Tails. While they are unable to have pets, per rules of their landlord, they are inspired by cute cats.

“Our demographic are younger girls, aged 10-20 yr olds, with a lot of interest in cute cat things. We are pairing this with the ability to customize your cat to hunt, fight, explore and socialize in an open world,” says Tyler. “It’s an underserved market. 44% of gamers are women. We are exploring the simulation genre, giving this a shot and see what we can do with it.”

Cat Tails will launch a Kickstarter campaign in April.

“Hoosier Shakes, a Shakespearean troop, works out of The Refinery, and a vegetarian club holds their meetings out of here,” says Holland, who enjoys the broad range of companies and organizations The Refinery is serving. The 2013 census shows the population of Marion to be 29,553. Since opening late September of 2015, The Refinery currently has 31 members.

“We listened to the needs of the community,” says Bowen. “We have not taken a cookie cutter approach to the co-working space. We offer very affordable monthly memberships starting at $30/month and host a lot of meetings here at no charge. We are also a community center in addition to a work space.”

The Refinery Business Center identifies themselves as a dynamic, affordable work environment for entrepreneurs, non-profits, remote workers, small businesses, contractors, start-ups, students, and all other types of independent professionals.