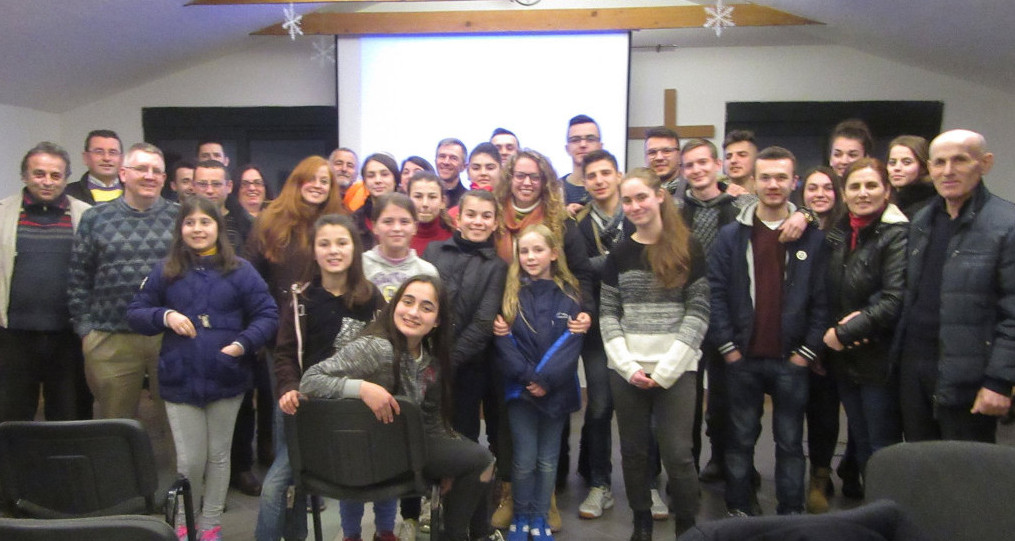 Although Aukerman nor his wife, Caryl, attended Indiana Wesleyan University, their son, Noah, is a freshman at IWU. “Though I did not attend a Christian university, my time at Indiana University (IU) played a vital role in moving me forward in my walk with Christ and preparing me for ministry,” Aukerman said. “It was a time in my life when my faith faced challenges that it had not directly encountered as I grew up in a Christian family that was in church every time the doors open. At IU, my faith truly had to become my own as I sorted through the challenges that popped up in the forms of Darwinism and humanism in my freshman honors seminar and through interactions I had every day with people whose perspectives on life and faith were far different from mine.”

Kisha e Shpreses is structured differently than the model most North Americans are used to. “Our structure is small-group focused, with a monthly celebration service at which about 30-40 Albanians worship and discuss the Bible. That particular service is Albanian-led, and the discussion at the weekly home fellowship we facilitate is also usually led by one of two Albanian men in the group. Up until about 20 months ago, everything was directed by missionaries, so it has been exciting to watch Albanians take on more of the leadership role as the missions staff catalyzes and encourages them in ministry. Especially to our home fellowship, I function in some ways as a pastor-shepherd, and particularly to the men, with whom I also try to spend time individually each week over coffee. In the months ahead, we hope to see this group divide, move out of our home into Albanian homes and reproduce as Albanians apply the disciple-making movement principles that we are emphasizing on our field,” Aukerman explained.

In addition to overseeing this home fellowship, Aukerman’s family hosts two weekly kids clubs in Aukerman’s home (in partnership with Child Evangelism Fellowship) and currently has a weekly Bible study in another home. “I am our missions team leader, facilitating our weekly team meeting and monitoring the work, relational and spiritual life of the missionaries on our team. We also continue to spend significant time building relationships in our neighborhood for the purpose of finding others who are interested in reading God’s Word with us and/or with whom we can share the gospel. For me, this means spending quite a bit of time in the local coffee houses where men congregate and drink their morning or evening espresso. I really don’t like coffee, but I care about Albanian men, so most days will find me visiting a couple of coffee shops, steeling my taste buds to suck down a cup of espresso, and diving into conversation with the local men before tackling the rest of my day,” he said.

As missionaries, the biggest sacrifice for Aukerman and his family have been leaving their family, church family and close friends. It’s also been hard for them to accumulate to a new culture and speak a language that was not their own. “God has blessed us with great friends here, and we have done well with the language, but we still miss the facility of communicating in English, our way of life in America and regularly seeing those that are dear to us in America,” Aukerman said. “One great difficulty we find in ministry in Albania is the pervasive universal-ism that we encounter. From 1967-1991, all religious practice was outlawed in Albania, which declared itself the world’s first officially atheist nation. For all of the government’s efforts, they never succeeded in convincing people that there is no God, but Albanians came out of communism very confused spiritually and, in this land where most call themselves Muslim, about 20% claim to be Orthodox Christians and about 10% Catholic, most believe that all roads lead to God and that it doesn’t much matter in what you put your faith. There is little urgency or concern on the part of most Albanians to seek out, determine and follow the Truth. That makes it difficult to challenge Albanians to a real faith commitment.”

A fun fact about himself is that Aukerman has been on TV three times, “—for a grand total of 2 seconds!  In Albania, I was filmed once as part of a crowd at a city council meeting and another time giving blood at the hospital after a disaster. As a teacher in the US, I won (or maybe lost!) a contest in a Riley Children’s Hospital fundraiser, in which students voted with their pocket change for which teacher they would most like to see kiss a pig, which got me on the local news.”

In addition to their service in Albania, Caryl and Matt (before children) also served a year as volunteer missionaries with GP in Ryazan, Russia.