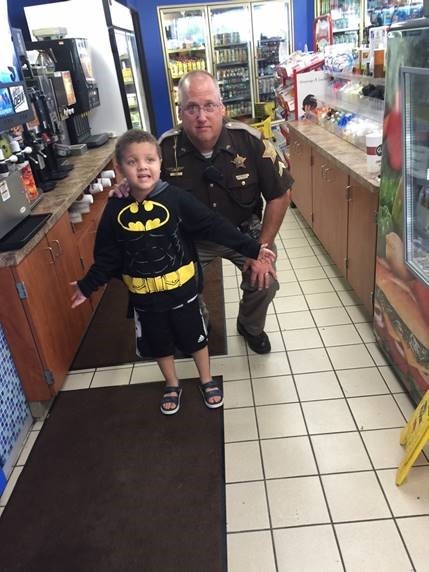 Jr Harold Davis is a three-time graduate of Indiana Wesleyan University. He obtained his associates degree in Criminal Justice in 2011, his bachelors degree in Criminal Justice in 2013 and then finished by completing his masters degree in Public Administration in 2015. He feels that God chose IWU for him, because he was led to attend IWU at a time where he needed to be closer to Christ. Davis knew IWU was a good fit for him when he experienced the atmosphere and realized the emphasis in biblical studies and Christ-based curriculum.

The time Davis spent earning his degrees was very challenging. As an adult learner, being out of high school for many years, he had to readjust to fast paced learning. The staff and professors at IWU though were very understanding of the unique challenges adult learning presented, and they always assisted Davis in any way he needed. Davis also found the comradery of his peers to be encouraging, as they were all adult learners trying to balance family life, jobs and undergraduate/graduate studies as well. Beyond just working together on assignments, Davis and his peers shared personal stories and dove deep into their personal reflections on assignments together. They became what Davis described as “more than classmates, or cohorts, [but a] family.”

Davis appreciated the required bible courses at IWU, saying that he found them to be “enlightening.” While the coursework was intimidating at first, especially to Davis who did not consider himself “bible savvy,” he quickly realized that he simply had to trust God. When Davis allowed God to take control of his education, he found that he gained more knowledge than he ever would have expected. Davis accredits his time at IWU with allowing him to get into his current daily routine of bible reading and prayer. In reflecting on his spiritual growth during his time at IWU, Davis said “whereas before, [Christ] was just an acquaintance, [now] He is truly my Savior.”

Currently Davis is a Deputy Sheriff for the Shelby County Sheriff’s Department, going on 25 years. He is also the owner of his own risk assessment business, Eagle Eyes Risk Mitigation, LLC, which he started during his time at IWU based on a class assignment.

Davis has worked with many school districts and with the Department of Homeland Security, as he has worked with an innovative security system that launches counter measures on active school shooters. One school that has been equipped with this state of the art technology is considered the “safest school in America.” NBC news recently featured this security system with an onsite visit. To watch the whole story, and learn more about the system Davis works with, click here: https://www.nbcnews.com/nightly-news/video/inside-the-safest-school-in-america-1166029891710?cid=eml_onsite.

Davis said that his time at IWU helped to shape his attitude towards helping others so that they could better help themselves. He has been a consistent Eagle Scouts volunteer since he was a youth, and he realized that his attitude towards the students was more joyful and selfless than it had been before. This attitude, of course, has also permeated into his job as Deputy Sheriff. Along with the other virtues, IWU helped him cultivate, Davis also experiences more patience and a greater value in independent learning than he did previously.

Davis also said that IWU helped prepare him for how demanding the job as deputy sheriff can be on a person’s soul. He witnesses some of the most difficult days in people’s lives and has to lovingly interact with people who have made criminal offenses. There is a balance he has to find mentally, between the pain of seeing someone choose a path of crime and the joy of seeing a lost child reunited with his or her family. Davis said that he often prays while on duty, asking “the Lord to give me strength to carry on and work through what I must see or face.” He recalls times where he has been able to pray with those in crisis. With his position as a  law enforcer, Davis has also had the opportunity to mentor students and point them to the loving forgiveness of Jesus.

Outside of his very busy schedule with the sheriff’s department and his own business, Davis is the vice president of a model railroad club. He also spends lots of time with his family, saying that that is his “best time.”

His advice to current IWU students is to “never give up! When you think it is time to quit, DON’T! Many times, during my degree work, actually every year for all six years, I thought I would just drop out and say ‘enough.’ Instead, I listened God, my cohorts and instructors. These God sent individuals kept me going when I was giving up…. When you get to the end, and receive that email to order that cap and gown, WOW, just WOW. You know you made it to the end.” He also added that is is so important to “Enjoy life, [and] don’t sweat the small stuff; life is too long, yet too short to be unhappy. Respect everyone. Don’t run, but walk. Take your time, because everything can wait.”