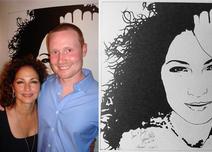 “It was kind of surreal,” Tim Petrinec (’03) says of his appearance on the reality show/docu-series Work of Genius. In 2009, Petrinec responded to a casting call for visual artists, and was soon invited to New York to audition for the show. “I grabbed three pieces of art and drove up from Charlotte [NC],” Petrinec recalls. He soon received word that he had made the top 50, and that he would be flown to Miami for the filming of the show. “They told me to pack for either three days or three months,” Petrinec laughs, “so I packed for a week.” On his first day in Miami, Petrinec was told that he had made the top 12. “It was exciting news, but as time went by, I wished more and more that I had packed for more than one week.”

Work of Genius is “a 13 – episode reality show that exposes and challenges twelve of the most talented, yet previously undiscovered international artists, to live, create, and compete together for the chance of having their life and career transformed.” The top twelve artists live at a hotel in South Beach for three months, traveling around the greater Miami area to “compete in a series of mini-challenges from crayons to chalk, pencils to watercolor, sketching to sand castles.” Work of Genius operates differently from other reality shows in that no one is eliminated during the filming. Instead, viewers can evaluate the original paintings that the artists produce for each show and vote for their favorite artist online. Should Petrinec win the distinction of “Top Artist,” he will receive “a cash prize, representation in a top gallery, and a publisher for 1 year.” Work of Genius airs on Saturdays at 3 PM on NewsmaxTV. At the writing of this article, Petrinec was in second place for Top Artist.

Both Petrinec and his twin brother Nathan graduated from Indiana Wesleyan, though from vastly different departments. While Nathan studied business administration, economics, and political science, Petrinec says his brother is also an artist and inspired him to study art in college. At Indiana Wesleyan, Petrinec studied painting, illustration, and printmaking under Rod Crossman and Ron Mazellan, both of whom still teach in the Division of Art. After graduation, Petrinec moved to Brooklyn to begin a career as an artist, but did not anticipate the hardships of ‘making it’ in the art scene. “I thought, I make art, and people buy art,” says Petrinec, who was soon forced to look for a job apart from his commissions. When a ski accident forced Petrinec to move in with his parents, he began to read the Bible more frequently, as well as The Purpose Driven Life. Bedridden with a broken leg for two months, Petrinec began to realize that “I am not the protagonist in my story, and my success is about how I glorify God.”

When he recovered, Petrinec found a job at a radio station in Charlotte, North Carolina, but was soon laid off because of budget cuts. “[The lay off] wrecked me,” Petrinec recalls. “I was trying to figure out what God wanted from me, praying, working on artwork and trying to figure stuff out,” yet doors seemed to be closing in every direction. It was at this low point that he heard about the Work of Genius casting call. Calling the show “a symbol of answered prayer and hard work,” Petrinec says that the six-year waiting period for the show to air was difficult to understand. As networks dropped the show, Petrinec says that Work of Genius turned into a symbol of disappointment, yet believes that God used this time to refine him so that he could give back to others.

Today, Petrinec is a financial advisor with Edward Jones in Charlotte, and continues to paint on commission. Petrinec’s Portfolio includes many works of “music based art,” or “two dimensional music.” Petrinec believes that “this art captures two things: the essence of the musician and the visual representation of their music.” In this collection is “Rolling Stones,” a commission for the Presidential Suite at the Hard Rock Resort in Singapore, as well as “The Lumineers,” a commission for Wesley Schultz of The Lumineers. Petrinec’s paintings echo the surreal qualities of rock music: the watercolor “Electric Blues” shows Jimi Hendrix awash in negative space, while in “Oceanic Journey,” Jimmy Page of Led Zeppelin points off the canvas.

“I don’t know if a painting of Keith Richards is necessarily portraying God,” says Petrinec, “but music speaks to me. God created us to be able to create, and when I make art, I’m using what God gave me, creating something beautiful that hopefully speaks to somebody.” Petrinec views art as an expression of divine creativity, and is grateful for the opportunities that God has given him to see beauty in the world.